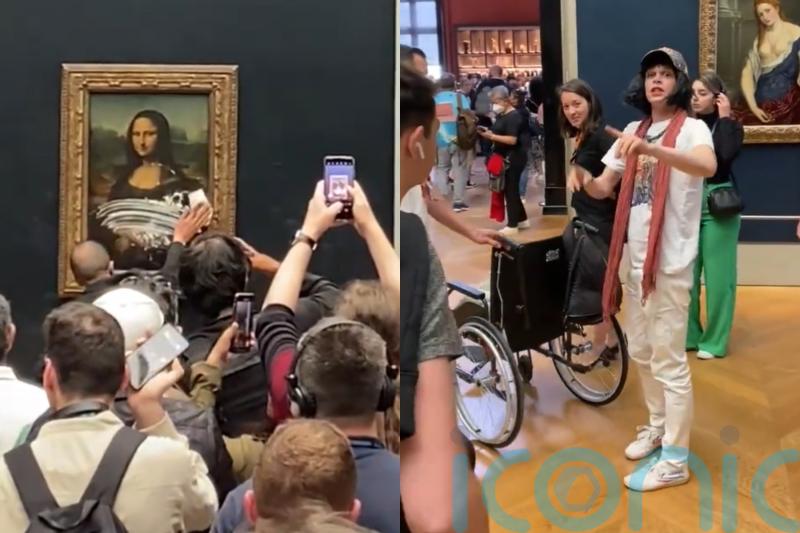 A man disguised as an elderly woman in a wheelchair has thrown cake at the Mona Lisa, in a moment described as “jaw-dropping” by witnesses.

A man disguised as an elderly woman in a wheelchair has thrown cake at the Mona Lisa, in a moment described as “jaw-dropping” by witnesses.

Leonardo da Vinci’s famous painting was unharmed in the incident at the Louvre in Paris on Sunday, as the attack left a smear of white cream across its protective glass.

The perpetrator, wearing a wig and lipstick, called on people to “think of the Earth” as they were led from the scene.

Liverpool FC fan Klevis, who did not wish to share his second name, was at the Louvre following his side’s 1-0 defeat in the UEFA Champions League final to Real Madrid at the Stade de France.

“I had mixed emotions, was feeling sad and disappointed,” the 26-year-old from Albania said.

“I came to Paris for the match and the second thing I planned to do was to see the Mona Lisa.

“Some guy dressed as an old woman on a wheelchair attacked it with a cake.

“What were the odds this would happen?”

Fellow Louvre visitor Luke Sundberg, a track and field runner from Denver, Colorado, witnessed the incident as he was queuing to view the masterpiece.

“The crowd begin gasping and we looked up and some man in a wheelchair (dressed) as an old lady ran up to the painting and started punching it before smearing cake all over it,” the 20-year-old said.

“It took about 10 to 15 seconds for the security to actually take the man away, but the crowd seemed to panic a little bit.

“It was jaw-dropping, it was a lot to take in considering how historic Mona Lisa is… the moment was once in a million.”

The activist was also seen throwing roses in the gallery.

A video from Mr Sundberg showed a crowd near the painting break into applause after the cream was cleaned from the glass.

The 16th-century work had the glass installed in the 1950s to protect it after an acid attack.