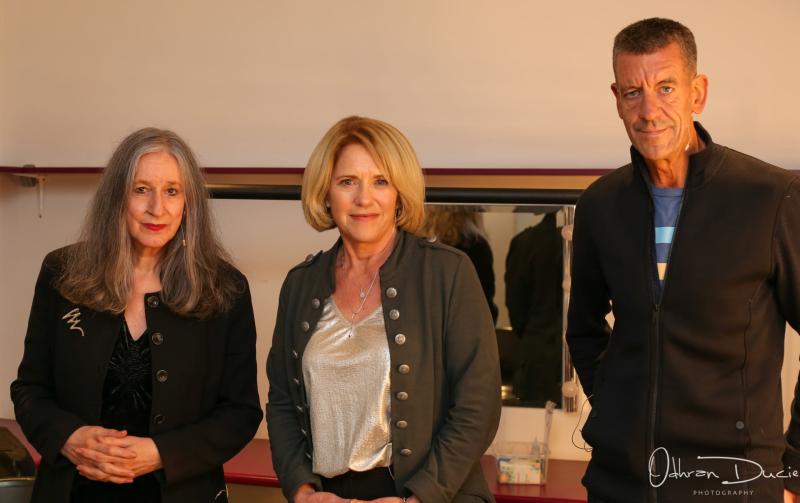 The Dromineer Nenagh Literary Festival got off to a great start on Friday night with a special pre-publication event with “Aisling” authors, Sarah Breen and Emer McLysaght.

Interviewed at Nenagh Arts Centre by author and Irish Times columnist Róisín Ingle, the two writers spoke hilariously about their writing routine; how they write together and the concept for the series.

Emer also spoke very candidly about her mental health and they both spoke about their great friendship without which the books could never have existed.

Saturday started off at the Lough Derg Yacht Club in Dromineer with the schools poetry prizes being presented by the cathaoirleach of Nenagh Municipal District, Cllr Michael O’Meara and judged by poet Eileen Sheehan.

The festival stayed in Dromineer to welcome Kerrí Ní Dochairtaigh and Madeleine D’Arcy who discussed their books Thin Places and Liberty Terrace. Introduced by Prof Sarah Moore FitzGerald, who described the books as her recent favourites, the two authors spoke about how inspiration, trauma and recovery are central to their work.

The creators of the Bad Bridgets podcast Leanne McCormick and Elaine Farrell were in conversation with Catriona Crowe and brilliantly described their research into the tragic stories of the less successful Irish women who went to America in the 19th century.

Among those were a number of Tipperary women, including Catherine O’Donnell, who came to the US pregnant in 1888 and who was found wandering the streets of Boston with her dead 12-week-old baby.

Catherine had been unable to continue paying the $2.50 for a childminder and had taken the child back, but the infant died in her arms.

She made her way to a police station, but finding it closed laid the child’s body on the ground. A passerby reassured her that the baby would be found and buried and gave her 12 cents.

However, to her horror she was arrested the next day and charged with murder.

Her lover, reputed to have been a bookkeeper in Ireland, had deserted her when she became pregnant.

Dr McCormick explained that is was quite common for women to land on the shores of America pregnant having been deserted by their lovers and going to the US was a way to hide the pregnancy.

Ms O’Donnell, it seems, came from a relatively well off family as she had a brother a priest and a sister a nun.

However, the main reason why Irish women ended up behind bars was addiction to alcohol.

One such case was that of Molly Leary from Nenagh, who left for America at the age of 14.

She subsequently worked as a shop girl and a waitress, but it was during her time working in a hotel that she first encountered her drinking companions.

She had four convictions for drunkenness in three years.

Molly walked with a limp after she fell four storeys from a building.

Susan McKay, author of Northern Protestants: On Shifting Ground made two key points (of many) during her interview with Moneygall born novelist Eimear Ryan. Namely that “people’s unionism has been shaken by Brexit” and that both the Catholic and Protestant churches imposed huge restrictions in both jurisdictions in Ireland.

It was a fascinating, informative and important discussion.

Saturday night saw a full house in listening to Diarmaid Ferriter, author of Between Two Hells, with Catriona Crowe interviewed by Drangan native and RTE presenter Mary Wilson about the Irish Civil war and how we need to examine and carefully reflect on events that led to the foundation of the Irish State.

Ferriter, whose father came from Thurles, revealed that the title of the book came from a quote from anti-Treaty Tipperary Sinn Féin TD PJ Moloney who told the Dáil in 1921: “We have been manoeuvred into a position where we have to choose between two hells”.

Sunday began with a return to Lough Derg Yacht Club to hear Declan Murphy discuss his book about his birdwatching, The Spirit of the River, with Allan Mee project manager, Irish White-tailed Sea Eagle reintroduction.

Played out to a backdrop of herons, gulls and sail boats on Lough Derg, the event had beautiful readings and fascinating conversation about nature and the environment.

The afternoon event was with debut novelists Eimear Ryan and Louise Nealon. Interviewed by journalist and author Edel Coffey, both authors spoke about how they wrote their novels inspired partly by their own lives but that the novels were not autobiographical.

The closing event of the festival was an enthralling mix of music and words with Hothouse Flower and multi-instrumentalist, Peter O’Toole accompanying very moving readings by Aifric McGlinchey from her poetry and memoir.