The Tipperary Star looked a lot different in 1909! 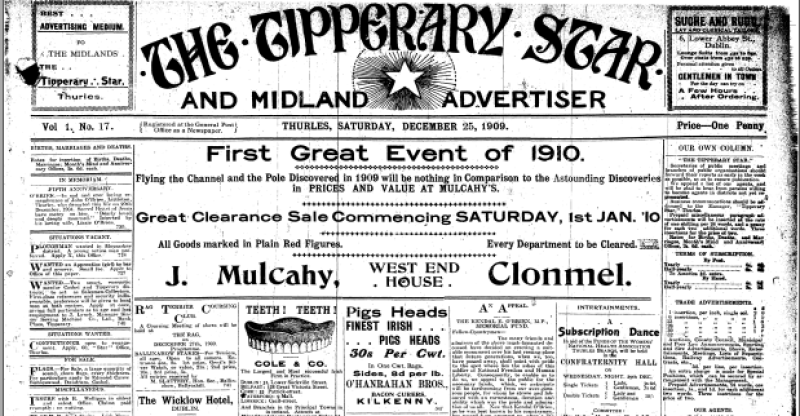 The first Christmas edition of the Tipperary Star 1909

A few weeks ago, the Tipperary Star ran an article on the importance of old newspapers.

This week we are looking at the first Christmas edition of the Tipperary Star.

"You are going to have all kinds of history for the last 200-300 years in the papers. They are primary sources, the material you are not going to get anywhere else," said Mary.

Featured on the front page of the Christmas edition 1909 is mainly made up of advertisements and notices of births, deaths and events.

One interesting notice is for a Subscription Dance in aid of the Thurles branch of the Women's National Health Association, which was set up to eradicate tuberculosis.

This advertisement listed the all-female committee, but women were not always named in their own right in newspapers of the day.

"The lady of Mr Whatever gave birth, she didn't even get a name, but she gave birth to a son, so again you can see the bias and the male dominant male-dominated the time," said Mary.

Unlike today's papers, historic papers would not have included much local news, prioritising courts, notable people and business.
Other notable notices include an ad for the Wicklow Hotel in Dublin and the sale of lost silk umbrellas from the railway.

Centres were a hive of activity in run-up to Christmas