REPORTS: Successful weekend for Tipperary teams in U15 intercounty tournaments 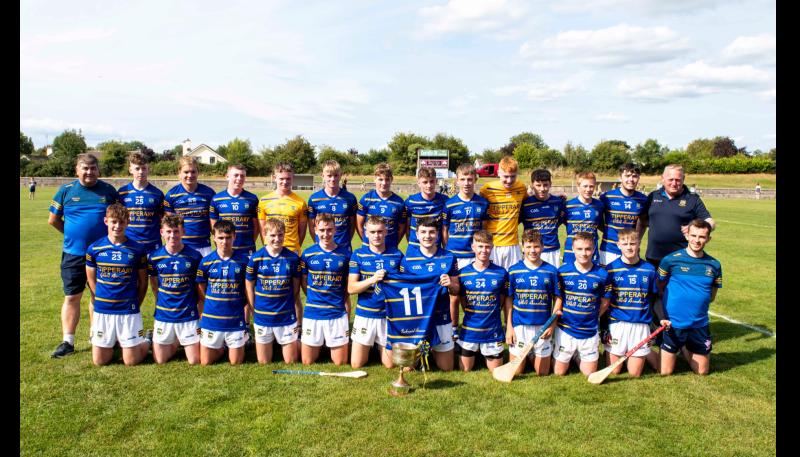 The Tipperary U15 team who won the John Doyle Cup in Moneygall last Saturday.

The Arrabawn Co-op U15 intercounty hurling tournament took place in Tipperary last Saturday, returning after a two-year hiatus and proved to be a very successful weekend for the competing Tipperary teams.

The games were split between four venues in north Tipperary in the form of Toomevara, Nenagh, Moneygall, and Borris_Ileigh who all pulled out the stops to host a very successful run of games throughout a beautiful ful day for hurling.

In Borris-Ileigh, the John Doyle Shield and the Arrabawn Shield took place, with as the Tipperary 1 team featured and performed very well against two good Cork teams.

Tipperary played Cork 2 at 12.30 and despite a sluggish start, had far too much for the youg Rebels with David Ryan, Eoin Doughan, and Patrick McDonagh all pointing inside the first seven minutes.

Cork pointed with two frees thereafter, bu the Tipp lads took over in the middle of the half, with Eoin Doughan in particular impressing throughout, along with Tom Corcoran, Jake Houlihan, and David Ryan the pick during the easy win.

It was Cork 1 that Tipperary would face in the final at 4.00, and much to everyone's surprise, it was just as easy as the prior game with an emphatic win in a dominant performance.

Moneygall's Eoin Doughan once again finished the game strongly, with his goal 12 minutes into the second half effectively sealing the win for the Premier, whie Stefan Tobin, Cathal O’Reilly, Cillian Minogue, and Toby Corbett impressing in particular the claim the Arrabaw Shield title.

The Tipperary 2 team also had success on Saturday in the John Doyle Cup in Moneygall, first at 11.00 on Saturday morning in the semi-final where they easily accounted for the challenge of Kildare by 4-18 to 1-6, while the finished out a successful day with a good win over Kilkenny 2 in the final on a 0-18 to 0-12 scoreline.