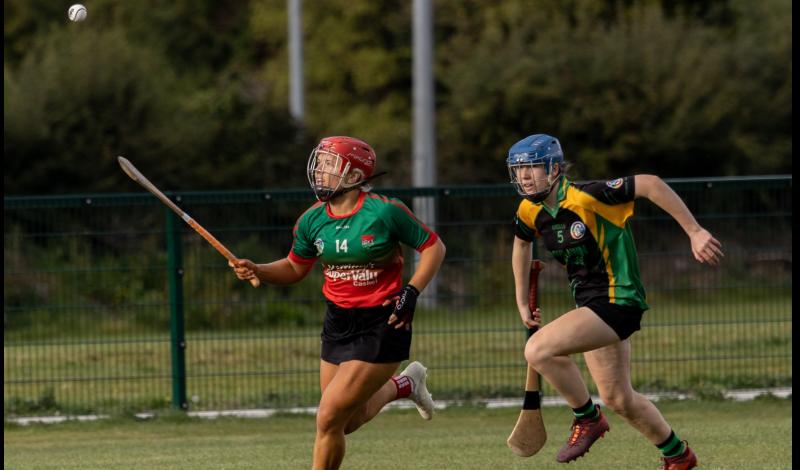 Click the >arrow> or 'Next' button to flick through the match reports from last weekends senior camogie fare.

A great rivalry has built up between Clonoulty Rossmore and Drom-Inch in recent years with the sides always bringing out the best in each other.

Saturday was no different as the large crowd in attendance were treated to a free flowing game of camogie. With plenty of sublime points, four goals, big hits and a few yellow cards there was a real championship feel to this encounter.

In the end Drom-Inch held on for a two-point win but more importantly both teams got a really good workout that will stand to them as they progress to the knockout stages and look to get better and better.

It was Drom who hit the ground running from the first attack with Miriam Campion who had an excellent first half was fouled to give Eimear McGrath the first of her five pointed frees. Almost immediately the three-in-a-row county champions were on the attack again and Eimear McGrath rounded her marker and bore down on goals. Her shot was saved but the clever Katie O’Dwyer was on hand to finish the rebound to the net.

1-1 to no score within the opening two minutes and the Clonoulty defence looked at sea. A minute later Cait Devane who led from the front putting in a huge shift at every spot at different occasions in the 6 forward positions scored a free to get her side off the mark.

Drom-Inch were on top in the opening quarter, with Niamh Treacy, Eimear McGrath (free), Anne Eviston and Miriam Campion all raising white flags to lead after 10 minutes 1-5 to 0-2. Clonoulty’s second point coming from Kate Ryan.
The game was being played at a good tempo and with Miriam Campion and Anne Eviston finding the target Drom began to increase their lead. The Clonoulty workrate and determination was very good and their running game drew fouls which Cait Devane was happy to slot over the bar.

A Devane point from play on the 22nd minute made it 1-8 to seven points but three minutes later a super solo run by Niamh Long saw the space open up for her and she continued to stride forward before flicking the ball past Orla Ryan in the goals to give Drom a seven-point lead with five minutes to half time.

There was plenty of time for more action with Cait Devane and Eimear McGrath exchanging scores from dead balls. Then Casey Hennessey had a shot on goal saved by the excellent Caoimhe Bourke. Moments later Cait Devane who was now operating at the edge of the square gathered possession, turned and fired an excellent shot into the back of the net.

This was followed by a pointed free to leave the score 2-9 to 1-9 to the visitors at the break after an exhilarating first half.
County senior stars Cait Devane and Aoife McGrath enjoyed a great battle throughout the hour and after the restart Cait nailed another free.

However a minute later Aoife drove forward from the half backline and scored a wonderful point straight off the hurley.
There were plenty of other great match ups including Eimear Loughman and Eimear McGrath and Courtney Ryan and Sinead Ryan in midfield vs Niamh Treacy and Niamh Long.

Drom seemed to have the better of these exchanges in the opening half but certainly as the game progressed Clonoulty were getting on top of the key battles and in particular Courtney Ryan started winning more possession, giving their side a lift and feeding better ball inside.

Drom though looked very sharp anytime there was a goal chance and Niamh Ryan reacted quickest to a batted clearance to slot home her side’s crucial third goal in the 34th minute. This made it 3-10 to 1-11 and Clonoulty with an uphill battle of a seven-point gap to try and bridge once again.

They more than proved they were up for that battle and points from Kate Ferncombe and Cait Devane chipped away at the Drom-Inch lead. Two pointed frees from Eimear McGrath the second in the 49th minute were to be Drom’s last scores of the game.

A Kate Ryan point in the 56th minute plus another score from Kate Ferncombe 3 minutes later made it 3-12 to 1-16 as the game headed into injury time.

With time up Clonoulty won a free in midfield. The referee indicated time was up and instructions from the line was to drop it into the danger zone in search of a winning goal.

To their disappointment nothing game of it and the ball was waved wide as the final whistle sounded to the delight of the Drom-Inch team who recorded another impressive victory over their rivals.