Portroe edge past Loughmore Castleiney in U17 decider 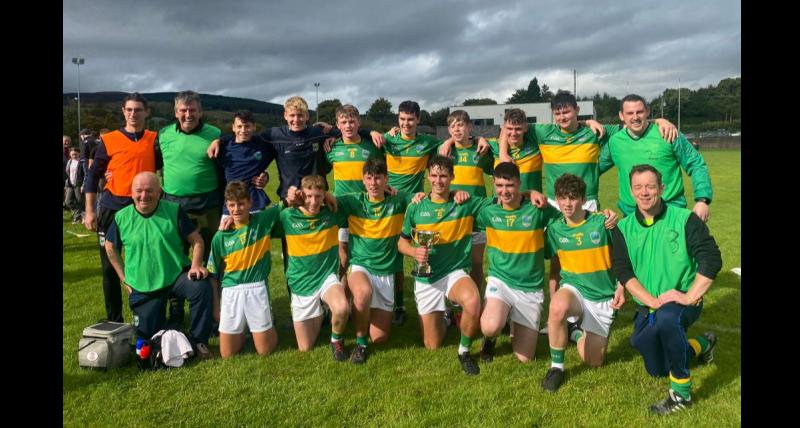 The sun eventually shone in Kilcommon for the beginning of the U17 C country final  for what was a tit for tat affair, coming down to a nail-biting finish for both sets of supporters.

Portroe settled a fracture more quickly than Loughmore/Castleiney during the initial 10 minutes of the game, through some accurate free taking by Jack Quin. This was a consistent pattern throughout the game but was also accompanied by a strong display from Jack in general.

Once Loughmore/Castleiney got into the game, their tendency to look for wider areas began to pay-off and Oran Breen reduced the deficit to the minimum, with a smart stroke from the left wing 15 minutes into the game.

Both sides worked hard throughout, none more so than Matty Madden on the left wing for Portroe and he was rewarded with a green flag when his strike from a central position, 21 yards out, beat the Loughmore/Castleiney defence on 16 minutes.

Loughmore/Castleiney immediately replied with a brace from Richard Morris following a good delivery by Colm Gleeson and a great team score when Loughmore/Castleiney players, Thomas Bohan, Mikey Ryan and Cathal Ryan combining to work the ball into Morris’ path.

On 24 minutes Portroe led on a score-line of 1-5 to 0-04, when the game was unfortunately interrupted by an injury to Dave Moloney – every caution necessary took place and while very disappointing for Dave, it was with some relief, the crowd applauded Dave from the pitch. The match continued with both sides reduced in numbers by one following this incident.

Richard Morris stormed Loughmore/Castleiney back into the game on the restart with a goal from the left following a delivery by Eoin ’Connell.

Matty Madden replied with a pointed free before Loughmore/Castleiney’s Joey Quin finished to the net from 14 yards. This time it was Dylan Gamble’s turn to reply before Daniel McCahey put Loughmore/Castleiney back in front. Matty Madden drew the sides level once more and the half to a close with a 21 yard free. The score at half time was 2-5 to 1-8.

The fresh breeze now favoured Loughmore/Castleiney and saw Portroe needing Cody Morkan’s long clearance early in the second half. Both sides went tantalisingly close to goals early on with Ger Kirby (Loughmore/Castleiney) making a goal-line save and clearance on 4 mins. This marked a purple patch for Loughmore/Castleiney as they outscored Portroe 4 points to 1 over the next 10 minutes of the match, with scores from Quin (2pts) and McCahey and another pointed free. Matty Madden did interrupt this pattern with a long-range strike on the stand side.

Dylan Gamble was now working very hard behind the midfield, gaining possession and won a free for jack Quin to convert. As if to match this work rate, McGahey blocked a clearance for Richard Morris to convert, taking Loughmore/Castleiney’s lead to 3 points on a score line of 2-10 to 1-9 with less than 10 minutes to play.

Jack Quin dramatically drew the sides level with a great strike from a free, 30 yards out when Matty Madden’s approach to goal was stopped illegally. Cian Hogan’s strike from distance took the lead for Portroe and Quin extended this with another free from 45 yards.

Country titles should be as hardly earned as this, and Loughmore/Castleiney weren’t giving up easily, two narrow wides and Richard Morris ‘white flag’ reduced Portroe’s lead to a single point with one minute remaining. But again, great defensive play from Dylan Gamble and the Portroe backs saw the game out. Victory going to Portroe on a final score line of 2-11 to 2-10.