Sarsfields no match for Ballina 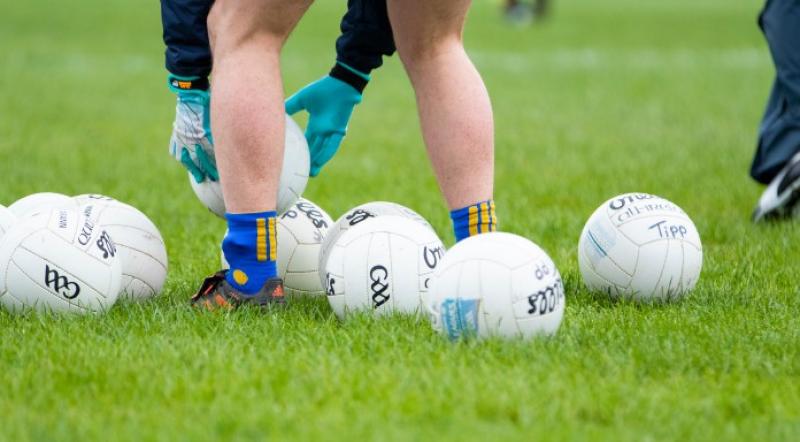 North champions Ballina had too much for a battling Thurles Sarsfields in the FBD Insurance county junior A football semi-final at Templederry on Saturday afternoon last.

And, it was their big gun – Tipperary footballer Steven O'Brien -who was the big difference between the sides as he kicked three points to ensure that his team would get over the line in front.

Mind you, O'Brien was fortunate to be still on the field – an accidental first quarter clash of heads between himself and Sarsfields attacker Michael Russell, reulsted in them both having to go off for treatement, which lasted for some time. O'Brien came back on before half time with his head bandaged – Russell was not so fortunate and was a big loss to the Sars team.
At the time Russell departed Sarsfields in front by 0-2 to 0-1. Playing with the aid of a strong breeze they had Kevin Bracken and Kieran Costello points, against one for Finn Looney for Ballina.

Sarsfields added others from Adam Garrett, who had come on for Russell and three from Paddy Creedon to give them a 0-6 to 0-4 interval lead – O'Brien and Matthew Power (2), keeping Ballina well in the game.

Two points was a narrow lead for the Thurles men considering the breeze they had at their backs and it wasn't long before Ballina made use of it after the turnaround – Power, O'Brien and Ray McGinley pointing to give them lead for the first time.
Sarsfields hit back through an Aidan Ryan score, but Matthew Power regained the lead for Ballina and by the second half water break the gap stood at 0-9 to 0-7 – Finn Looney grabbing another score for Ballina.

Sarsfields keeper Lorcan Cummins had made a sting of fine saves to keep his side in the hunt and he was to save again from sub, Tipperary hurler Willie Connors – yes this was Ballina and not Kiladangan, but the rules allow for a player from a club which does not have a football team to play for a neighbouring club, which does. Cummins save, though brilliant in its execution, mattered little as Ballina had pointed through Steven O'Brien, Looney and sub Tom Lee to secure a solid win.

Sarsfields just lacked a small bit of bulk with this relatively youthful side pitting their wits against a far more seasoned Ballina outfit. Still, Paddy Creedon – the best player on the pitch – Kieran Costello, James Armstrong, Emmet Fogarty and Glen Kerrigan were prominent while Lorcan Cummins had a fine outing between the posts and did wonderfully to keep a clean sheet.

For Ballina, the big two of Steven O'Brien and Michael Breen were in the thick of everything, while George Kennedy, Conor Maguire, Jerry O'Brien, Finn Looney and Matthew Power were also to the fore.