Knockavilla and Shannon Rovers to face off in Intermediate county final 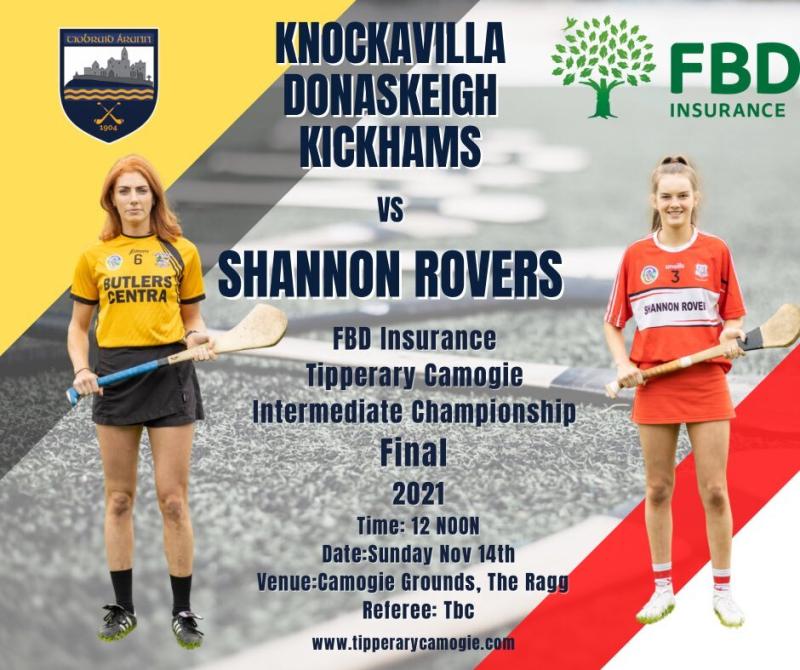 In 2019 Shannon Rovers defeated Knockavilla Donaskeigh Kickhams in the Junior A county final. This Sunday both teams will contest the FBD Insurance Intermediate county final and in 2022 one team will compete in the senior championship.

After winning the 2019 final Shannon Rovers similar to Knockavilla this year reached the intermediate final the following year. On that occasion they fell short to a very strong Thurles Sarsfields team.

Standing between them now and a county championship on Sunday is another formidable outfit in the Paddy Fitzgerald managed west Tipperay team.

The rise of both clubs through the ranks in recent years is testament to the great work being done in both clubs at both adult and juvenile level with both clubs regularly supplying players to county teams at all levels. Both Knockavilla Donaskeigh Kickhams and Shannon Rovers had to get through two really tight semi-finals to book their place in Sundays final.

In their opening game of the championship Kickhams had 10 points to spare over Kilruane MacDonagh’s winning 1-17 to 10 points.

The semi-final was a different story with the sides finishing all square 11 points apiece on 60 minutes. In extra time Kilruane’s key player Laura Shinners went off injured and Knockavilla started to get on top running out 4 point winners 16 points to 12.

This close test will really stand to them going into the final with manager Paddy Fitzgerald (speaking at the finals launch) believing that the ‘toughness to get over the semi-final in extra time will give them the bit of experience needed for the final’. He also alluded to the excellent fitness levels which stood to them in extra time.

Shannon Rovers’s semi-final win was also full of drama and excitement. An Aoife McLoughney pointed free in the 58th minute put them 3 points up before a Tara Mockler injury time goal levelled proceedings. A converted 45m in the dying seconds put Rovers back in front and back in an Intermediate final for the 2nd year in a row.

Celine Guinan and Rachel Hannigan both missed the semi-final through injury and Rovers will hope to have them available for the final. Despite boasting plenty of young talent Shannon Rovers two key players continue to be two of their most experienced players, household names full back Sabrina Larkin and centre forward Aoife McLoughney (who missed last year’s final due to a cruciate injury).

If Shannon Rovers are to win on Sunday both Sabrina and Aoife will need to produce another trademark big performance.
Both Knockavilla and Shannon Rovers have excellent free takers in McLoughney and Eimear Heffernan. In the semi-final Aoife finished with 9 points, 5 from placed balls.

While Eimear Heffernan scored 11 our of 16 points for Knockavilla with 10 coming from frees. Knockavilla’s 3 key players are no doubt their county senior players, Ereena Fryday who was recently nominated for an All-star, Caoimhe McCarthy and Eimear Heffernan.

Ereena has an abundance of experience playing in big games for both club and county. She will likely start at wing forward on Sunday but with her stamina and skill can easily switch out to midfield if needed. Both Caoimhe McCarthy and Eimear Heffernan were called into Bill Mullaney’s senior panel in 2021 after impressing for Tipperary minors.

Caoimhe is a powerful runner at midfield while Eimear can cause real damage in attack and will have to be closely marked by Shannon Rovers.

In the semi-final Ereena, Eimear and Caoimhe contributed all of their side’s scores. Captain Beth Ryan starts at centre back for them. A recent Tipperary intermediate defender Beth is an important player for Knockavilla and will look to command the half backline.

She won’t get things all her own way though if she’s marking Shannon Rovers Aoife McLoughney.
In one way the outcome of this battle could decide what way the game goes. Other players to watch out for on Sunday is Tipperary minor Caoimhe McCormack who started corner forward in the semi-final and full back Meagan McCormack.

A huge asset to Shannon Rovers is 2020 All-Star goalkeeper Aine Slattery. The distance and accuracy she gets in her puckouts gives her side a huge asset. Eimear Fogarty at centre back has also impressed all year for them while full forward Laura Leenane is a real scoring threat and scored 3 points from play in their semi-final win.

In the group games Knockavilla had a big win over Shannon Rovers beating them 2-19 to 1-9. Neither side is likely to read too much into this result as knockout championship and especially finals are a totally different situation. In the following round of games Shannon rovers bet Newport/Ballinahinch 6-16 to 2-14 while in the previous round Knockavilla had beaten Newport by only 6 points.

The semi-finals showed that there was very little between the top 4 teams in this year’s championship. At the start of the championship many people would have found it difficult to predict an overall winner and now that we are down to the final 2 it’s still not any easier to predict a winner.

We have had a wonderful FBD Insurance intermediate championship to date and no doubt Sunday’s final will be the highlight.
Throw in is at 12 noon in the County Camogie Grounds, The Ragg this Sunday November 14.