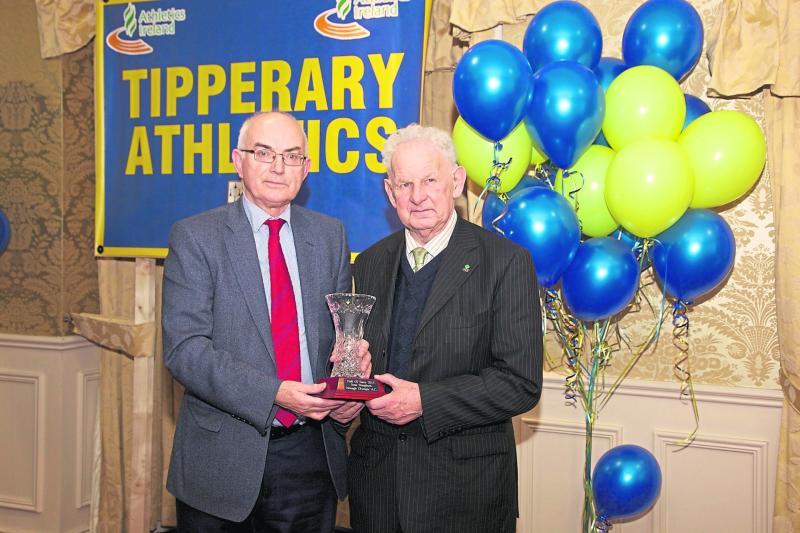 Tributes have been paid to the man known as “Mr Athetlics”, Nenagh’s Sean Naughton, who passed away last weekend.

Mr Naughton, who was 88, was a founder of Nenagh Olympic AC back in 1955, the man behind Ireland’s first indoor track at Tyone, and a former manager of Irish international and Olympic teams.

Following a battle with lung cancer, he died peacefully at his home, just metres from the indorr stadium he helped build.

Athletics Ireland said they were saddened to hear of the passing of Sean, who they described as an “Irish athletics legend”.

Sean was an athlete, coach, administrator, statistician, Irish team manager, Irish team coach and Sydney 2000 Olympic coach, as well as being behind the building of Ireland’s first ever indoor athletics facility in Nenagh.

He won Munster and National medals and was team coach for the 1987 and 1989 World Athletics Indoor Championships.

He was also team coach for the 1993 World Athletics Championships when Sonia O’Sullivan won a silver medal in the 1500m and 3000m.

“A true giant of Irish athletics. Our thoughts are with all of his family, friends, and club mates,” they said.

He spanned Irish atheltics for seven decades, but the one thing he will be remembered for it’s doing what so many others couldn’t - building the first indoor track in Ireland.

A promising sprinter, in 1972 he started Community Games in Nenagh, which attracted a wealth of young talent to the sport in the decades that followed. Sean’s innovative approach saw the town split into three sections, increasing both involvement and competitiveness.

His influence went far beyond Nenagh. He was part of the team management for multiple international championships across many decades, serving as team coach at the 1987 World Indoors in Indianapolis, where Marcus O’Sullivan and Frank O’Mara won gold, and at the 2000 Olympics in Sydney.

In 2009 he was recognised by Athletics Ireland with a lifetime achievement award, and in 2014 he was among those honoured at the National Volunteer in Sport Awards.

“At 81 years of age, Sean remains active in athletics and can regularly be seen in the indoor stadium mentoring, encouraging and coaching young athletes and coaches alike,” said Michael Ring, Minister for Tourism and Sport, at that function.

He was surprised to receive that award. “I have played many sports over the years,” he said. “But without a doubt athletics is the greatest sport of all.”

“Sean lived and died less than 100 metres from his beloved indoor arena, which came about mainly because of his vision and drive,” said Nenagh Olympic following his death. “His likes are once in a generation, but he can rest in peace knowing that his legacy is in good hands.”

Nenagh Olympic described him as “a legend in both Tipperary and Irish athletics for over 60 years. Seán lived and died less than 100m from his beloved indoor arena which came about mainly because of his vision and drive.”

Pierce O’Callaghan, head of competition management at World Athletics, recalled some of the lasting influences Sean made on Irish athletics, and the influence on his own rise through the sport.

“Seán fulfilled many roles and wore numerous hats in the sport - athlete, coach, administrator, statistician, Irish team manager, Irish team coach and Sydney 2000 Olympic coach to name a few. Of course, on top of that he was a loving husband and father and successful businessman.

“Following a competitive sprints career winning Munster and National medals he was delighted to be promoted to team coach for the 1987 and 1989 World Athletics Indoor Championships, a remarkable period when Ireland won three gold and one silver medal.

“It was also during this period that he was showing his true tenacity, vision and relentless hard graft in building Ireland’s first ever indoor athletics facility, in his home town of Nenagh of all places and it is for that he will be longest remembered.

“He is the last of a breed, one of the old-school of Irish coaches and officials, and the sport will be much poorer without Seán’s integrity, enthusiasm and passion. To his wife and kids we extend our deepest sympathies and hope that the sport will find a way to honour Seán’s memory by naming an award or similar in his honour,” he said.

His funeral took place on Monday from his home to St Mary of the Rosary Church, Nenagh, for funeral Mass, followed by cremation in Shannon Crematorium.