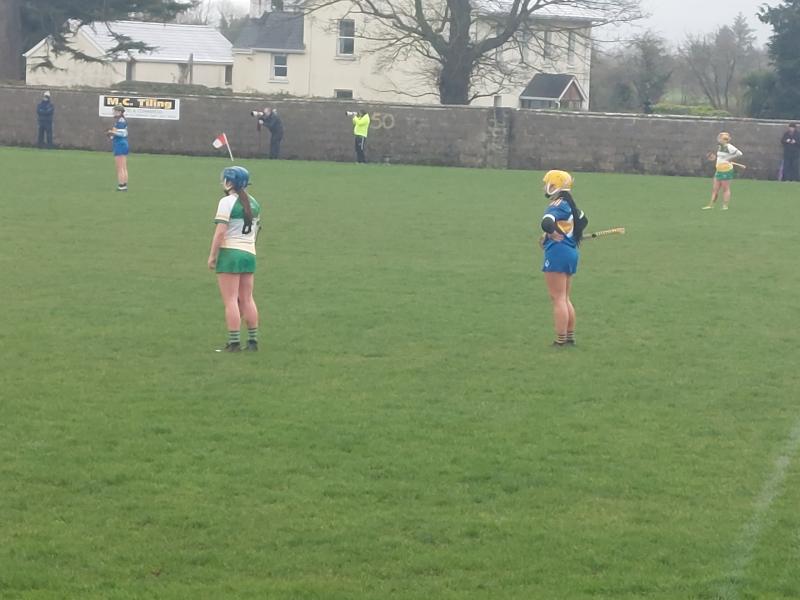 Tipperary had another easy day at the office in round two of the Littlewoods Camogie League after a first half dismantling of neighbours Offaly in windy conditions in Bansha.

Offaly had to concede home advantage after the pitch in Shamrocks GAA Mucklagh was called as unplayable yesterday, and so the game was moved to a Tipp venue, athe Premier ladies took full advantage.

With Eunice at Tipp’s back in the first period, they played some sumptuous camogie, with their forward division really looking the part, creating four first half goals through Clodagh McIntyre, Jenny Grace, Claire Hogan, and Caoimhe McCarthy as Offaly couldn’t make the same impact on the scoreboard.

Offaly had arguably a stronger wind in the second period, but Tipp more than broke even, despite the scores not coming as easy into the face of the gale, but they released the bench in the second half, with Cait Devane and Mary Ryan making appearances much to the dismay of Offaly who tried hard to get back the score difference, but it was never going to happen with the state of the teams.

The first half use of the wind by Tipperary was applied to devastating effect early on, with goals from Clodagh McIntyre and Caoimhe McCarthy inside the first ten minutes putting Tipp in a very good starting position.

Offaly were really struggling to get puckouts past the half back line and with the 50/50 balls being won by Tipp, the chances flowed with score after score coming through Jenny Grace, McCarthy, McIntyre and Roisin Howard, who were all using the hand pass to good effect.

Orla Gorman was the only real threat for Offaly in the opening half, and after Mairead Teehan pointed an early free, Gorman did well to score a goal for her side around the 23 minute mark, latching onto a direct ball before rounding the onrushing Aine Slattery to kick the ball to the net.

But it was only a short stemming of the bleeding at the other end, as a nicely finished goal from Jenny Grace along with further points from Grace O’Brien, Roisin Howard, and Claire Hogan gave Tipp a massive 4-15 to 1-2 lead; even allowing for the breeze.

The lower scoring nature of the second half could be put down to the raft of changes made at half time by Tipp as they gave the bench an opportunity to impress, and from here, it became slow and disjointed as the Tipp defence won the backs and forwards match that took place in the third quarter.

The highlight of the half was probably the two penalty saves at either end of the field, as Jenny Grace had a strong effort saved by Eleanor Clendellen before Aine Slattery repeated the trick ten minutes later to stop a tame Orlagh Mairead Teehan effort.

Cait Devane made her usual impact off the bench and scored a few nice points in the final ten minutes, one of which was a monster score into the teat of the wind as Tipp outscored their opponents 0-6 to 0-4 in the second half to ease over the line and clinch a second win in a row.

There were top performances from Clodagh McIntyre, Roisin Howard, Jenny Grace, Claire Hogan, Karin Blair and Caoimhe Maher, and Bill Mullaney will be delighted with the level of the panel at the moment.