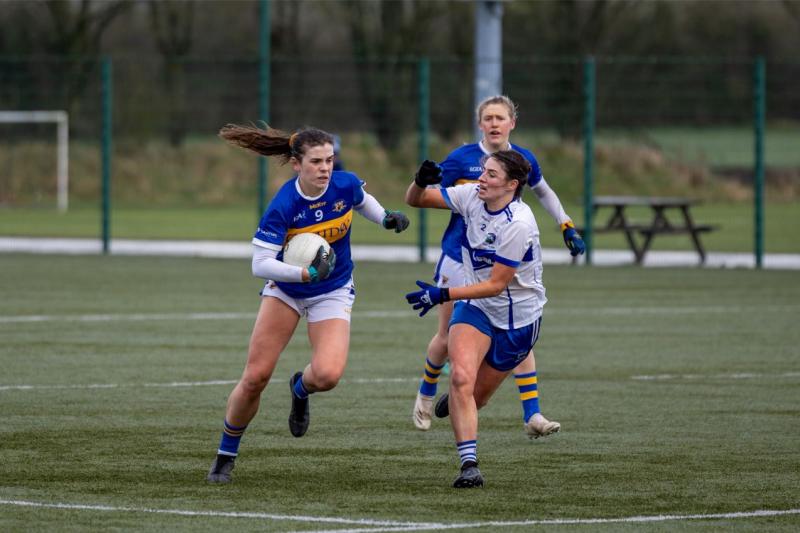 The Tipperary ladies made the trip to Queens County on Sunday last to take on the home side at Heywood,  hoping to get their first win of the campaign following defeat the previous Sunday in Killarney against Kerry, but left emptied handed after a strong finish from the home side.

On a miserable day weather wise the elements had a big bearing on proceedings with the strong wind making it the proverbial game of two halves.

Peter Creedon’s side had the elements at their backs for the opening half hour and got off to a dream start making full use of the gale with early goals from Sarah English and Caitlin Kennedy.

Another powerful run saw the Aherlow player hit the post and with Tipp dominating at this juncture, her clubmate Emma Morrissey added another point. However, Tipp suffered a big blow just before the water break when Laois struck for a goal of their own.

Laois midfielder Jane Moore picked out the run of Emma Lawlor and although Lawlor fumbled the ball at first, she successfully picked it up at the second time of asking and fired it into the net past Lauren Fitzpatrick.

The home side were growing more into the game and although sisters Anna Rose and Caitlin Kennedy pointed for Tipp, Laois significantly raised a brace of white flags before half time. The Leinster side would have been well satisfied going to the half-time break trailing by just three points at 2-3 to 1-3.

No doubt, with the strength of the wind they had the advantage of Tipp should have carried a bigger lead, the Laois first half goal a real let-down for the visitors.

Tipp started the half brightly but wasted a couple of good scoring chances and with conditions deteriorating further, Laois got their expected purple patch and added five points in a row putting themselves two ahead in the process.

But showing great heart and determination Tipperary refused to bow and rallied with an Emma Morrissey free before drawing level with another free from the Aherlow forward just returning from injury having missed the trip to Fitzgerald Stadium.

The match-winning score, a goal, arrived 10 minutes from time. Mo Nerney, delivered the goods once more for Laois as she had the previous week against Clare. Nerney fired in the crucial goal to give her side a three-point cushion .

Admirably, Tipp still stuck to their task and rallied again, with Cliona O’Dwyer forcing a great save from the Laois keeper to deny a certain Tipp goal. Tipp’s Marie Creedon then rattled the post before Emma Morrissey reduced the margin to just two with a point from play.

Despite the huge Tipp pressure, Laois hung on for the two valuable league points.

At the final whistle the young Tipperary side were left to rue the chances that might have changed the outcome. It leaves them now needing to beat Clare to avoid a relegation play-off. The other Division 2A game at the weekend between Kerry and Clare was postponed.