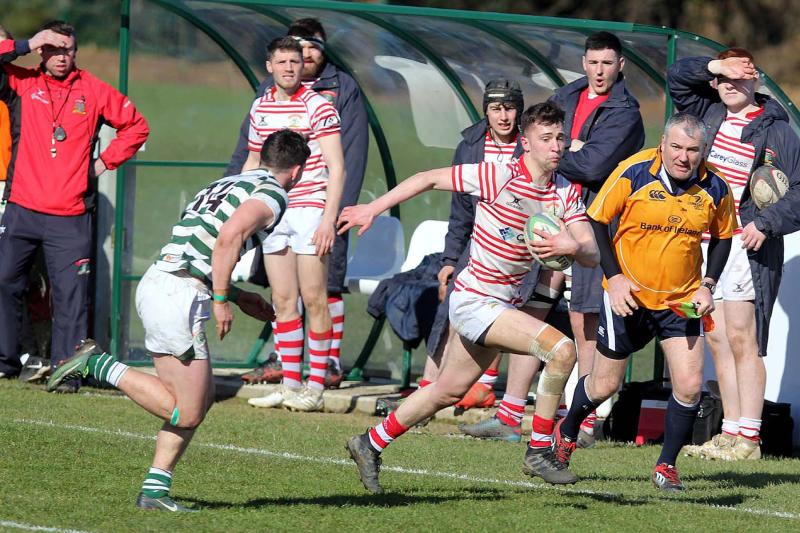 Nenagh Ormond continue to gain late momentum in their bid for Division 2A survival in the All-Ireland League as they completely demolished Rainey Old Boys in New Ormond Park last Saturday.

Prior to the game the gap for Nenagh to UL Bohs ahead of them was seven points meaning any slip up could allow the Limerick men to pull away from the relegation playoff spots.

For Rainey this game was essentially a last chance saloon in terms of keeping pace with the pack, a loss would almost certainly condemn them to a two legged relegation playoff at the end of the league.

Nenagh went into this game with several changes to the team which took on league leaders Queens University in Belfast the previous weekend, in this case however the Nenagh outfit started ablaze with a strong wind at their backs in the first half.

Rainey were perhaps physically the biggest opposition encountered this year and would show flashes of the damage they could inflict with their direct, power game sporadically but it was the Nenagh side who made the best of the dry, windy conditions moving the larger Derry men around at will.

While lineouts were a lottery in the swirling winds the Nenagh scrum was very solid and provided the platform for both of the opening scores. Half backs Derek Corcoran and Nicky Irwin were those on the end of both set play attacks to dot down and send Nenagh into an early lead.

The third try came just prior to half time with David Gleeson making a fine break before chipping ahead from a kick recovery in his own 22. On regathering his kick he had only the full back to beat for the score. In an attempt to put Gleeson to touch however the Rainey full back failed to wrap in the tackle and was duly dispatched by the referee to the sin bin. As he was the sole covering player the referee also ruled the offence worthy of a penalty try leaving Nenagh 19-0 to the good at the short whistle.

The opening ten minutes of the second half were the winning of this game. With the breeze now behind them Rainey upped the pace of their play significantly. In repelling the onslaught Nenagh conceded a number of penalties to allow Rainey to kick for position in the 22 and get their maul game going.

They patiently built phases leading to a goal line defensive set for Nenagh. Another penalty saw the Rainey captain opt for a scrum 5m from the Nenagh line. A try at this stage with 30 mins backed by the elements might have spelled danger for Nenagh. The Nenagh scrum held firm however and some strong follow up tackling forced a knock on from Rainey and the siege was lifted.

This seemed to drain the energy from the travelling side and with what definitely appeared to be the fitter side Nenagh took full advantage with John O’Flaherty and Fionn McGibney adding tries before a well worked cross-field kick allowed Peter Coman to score near the end for the icing on the cake.

This was a fine performance from a Nenagh team clearly finding form. In fact it was their third five-point performance at home since Christmas. Results elsewhere left the standings more or less on a par with last week.

However the bonus point for Nenagh closes them to within six points now of both UL Bohs in eight place and Dolphin in seventh. The opportunity to narrow the gap comes fast with Nenagh travelling to UL Bohs for a Friday Night Lights fixture on the UL 4G at 8pm next Friday.

This will play a huge role in deciding who is most likely to join Rainey Old Boys in a relegation playoff series at season’s end. However with 4 games still to play and form guides being torn up in recent weeks, one feels there might be a few twists in this story yet.