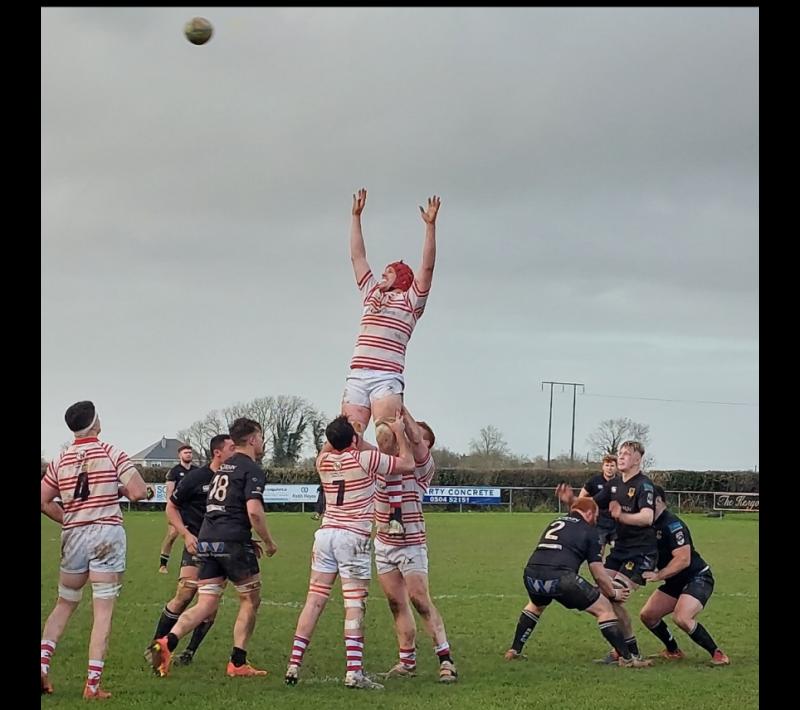 Nenagh made the short trip to the UL 4G playing grounds Friday night for what was a key encounter for both sides in the Energia All Ireland League. Ul Bohs entered this match in 8th position with a 6 point advantage over Nenagh in 9th place and the relegation playoff position. Therefore this game was filled with opportunities for both sides. For Bohs a win would go a long way towards distancing themselves fully from any relegation threat. For Nenagh a win would close the gap to 8th place and with three games to follow, two of which are at home, a big opportunity to play their way out of a relegation playoff.

It is not surprising therefore that this game was close, tense and ultimately came down to the bounce of a ball in the end. Over the full course of the game however Nenagh will have to face the uncomfortable fact that when the key moments transpired to decide the game they came off just slightly second best.

This Nenagh side have been in a rich vein of form since Christmas. In the 5 games prior to Friday night they enjoyed three wins, 4 bonus points and left empty handed on only one occasion, that being away to runaway leaders Queen's University. Bohs for their part have hit form at the right time too. They prefaced this match with convincing wins away to Rainey Old Boys and promotion chasing Buccaneers.

A feature of Nenagh’s resurgence has been a far better functioning set piece than that witnessed in their horror run before Christmas. On Friday night however, particularly in the opening 30 mins their scrum in particular proved problematic once more. Winning clean ball on their own put in was difficult but more troubling was the concession of two penalties on the Bohs put in.

One of these led directly to three points for Bohs, the other provided the field position for them to get what was a well drilled lineout maul moving forward ominously which only broke down metres from the Nenagh line. From there the Limerick men worked the phases to score wideout and add the conversion for good measure. These two scores however were split by a superb Nenagh try.

From clean lineout possession Nenagh executed a set piece move superbly for Conor McMahon to touch down and Fionn McGibney added the extras. The scrum aside, when Nenagh did manage to secure possession they looked incredibly threatening with Davy Gleeson in particular making a number of searing breaks. On at least three occasions in the opening half Nenagh broke from deep to threaten the Bohs defence and on another day a favourable bounce might have profited Nenagh but Bohs just about held out.

What they didn’t manage however was to deal with Nenagh’s attack when launched from the lineout. On two further visits to the Bohs 22 before half time Nenagh attacked from this set piece, the first leading to a break in midfield for the impressive Patrick Scully to score under the posts. On the second occasion Nenagh put their own maul to good use, tying in the Bohs cover before a few quick phases of pick and go attack saw Rob Buckley breach the line for try number three. With McGibney adding the extras to both tries at 21- 10 Nenagh looked well placed to kick on.

The purple patch for Nenagh however was not without its costs. Kevin O'Flaherty was lost to injury in the lead up to the third try and then just after half time Scully who was up to that point proving a serious handful to Bohs in attack and had added two turnovers in defence also picked up an injury. With Conor Muldoon also entering the fray at hooker Nenagh had now lightened their bench considerably with a large chunk of time yet to play. The third quarter ultimately settled the game. Bohs got on the attack early.

They again showed their ability to exert pressure through the forwards, building phases well, narrowing the Nenagh cover and finding the overlap to score. Nenagh were next to get possession and attack. Looking steadier now at scrum time they had a better platform for possession and under pressure Bohs coughed up a penalty.

With McGibney in fine kicking form captain John O Flaharty pointed for the posts and McGibney made no mistake for a 24- 17 lead. Then unfortunately the wheels came off the wagon for Nenagh. From the restart and perhaps feeling the pressure with the magnitude of the game an unforced handling error in midfield allowed  Bohs to hack on into the Nenagh 22. A rushed clearance kick landed in open country for Bohs to exploit a broken field and score to tie the game.

Worse still McGibney now joined the injury list and Nenagh had a much altered back line. Needing a response Nenagh managed to recover possession but then perhaps lacking organization with so many changes in personnel quickly coughed it up. A knock on was handled by a retreating Nenagh player to compound matters giving Bohs an easy shot at three points to move into a 27- 24 lead.

Nenagh had to respond and to their credit they did. Both Jake O Kelly and Conor Muldoon were having a telling impact up front and the ever dependable John Hayes and John O Flaharty both played key roles too in Nenagh building pressure in the Bohs half. A considerable number of penalties were given against Bohs during this period and they can feel very lucky to have kept 15 players on the park at this time.

Nenagh went for broke and chased the try to retake the lead. Unfortunately one excellent surge from Hayes was incorrectly adjudged by the referee to have been held up in goal and from a position where scoring seemed inevitable Nenagh instead had a goal line drop out awarded against them and the siege was lifted.

Worse again more ponderous defending left Nenagh scrambling in their 22 shortly after and having just about held out a Bohs break a penalty was awarded for a late hit, again in shooting range and Bohs did not pass up the opportunity to extend their advantage to 6. With the clock in the red Nenagh showed admirable determination to fashion one more attack from deep in their own territory.

Both Derek Corcoran, who was impressive all night in attack and defence, and O Kelly had good surges to get into Bohs territory. Both wingers Coman and Gleeson also looked close to breaching the cover but credit to Bohs, they once more scrambled well. Nenagh did retain possession however and with bodies struggling on both teams Nenagh rolled the dice with Corcoran attempting to find Conor McMahon wide on the left with a crossfield kick.

Perhaps indicative of the margins all night, the kick was inches from perfection but unfortunately bounced into touch to the delight and relief of the Bohs team and support. The final score of 30- 24 meant delight for Bohs and the consolation of a losing bonus point for Nenagh.

Nenagh played some super rugby in possession on the night scoring three top class tries. It was their work off the ball however and penalties conceded that ultimately proved their undoing. Injuries to key players on the night certainly didn’t help but games like this are all about exploiting opportunities and the UL outfit certainly did this on the night, taking points from pretty much every foray into Nenagh territory and defending stoutly at the moments that mattered in the end game.

All is not lost for Nenagh. With three games to play there will be opportunities. At the same time getting injuries managed will also be vital. They play again on March 26th . This will allow time for some if not all of the walking wounded to rehab. Potentially they may have to face a two legged relegation playoff in April should results in the remaining three league games not fall their way so getting their strongest 15 fit and firing by then will be priority number one.