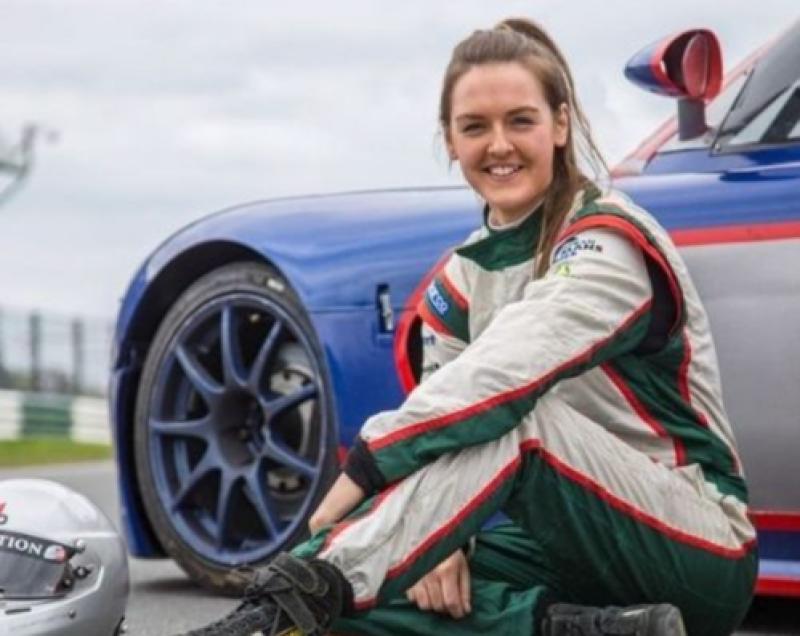 Roscrea’s Nicole Drought started motor racing in 2015. A novice to the sport, she has taken the driving scene by storm in her short time in the tracks of Ireland and the UK, and she recalls the early part of her life where sport and driving around the country at the various rally circuits was where she fell in love with cars.

“As a kid and being from Tipperary, I played a bit of camogie and played until around the age of 16,” she recalled.

“But my Dad had a car business and I was kind of always around cars and he would have been doing a bit of rallying at the time too, so I was travelling around the country with him and from there is where I got my interest.

Nenagh rail line has €45.5m investment with no return on speed or services

“I’d say when I was six or seven I used to think I was the main part of the team, assessing the car for damage when they came in for service! So I had a great interest from a young age, driving around my grandparents back yard on the lawn mower. So that was kind of the start of the whole interest in cars.”

In such a male dominated arena, Drought said she seldom took notice of the fact that very few women were involved in the sport, and simply felt that she was at home behind the wheel and paid no heed to anything else and had to work hard to give herself the opportunity to race.

“When I used to follow around my Dad I didn’t ever take notice of the lack of female drivers to be honest. I thought it was normal for me to be around cars and I was never made to feel that it was a boy’s thing to do, so I never left like I was different.

“It wasn’t until I had multiple part time jobs trying to save money that I had enough money to go out and buy my own racing car and after that I went to Mondello Park for the first time in 2015 and drove the track. So that would have probably been the first time I’d have noticed the lack of female drivers.”

In her first two years competing in 2015 and 2016, Drought competed in the Irish Touring Car Championship, becoming the first woman to win in the series in early 2016. She also made her sportscar debut in 2016, racing a Global GT Light at Anglesey Circuit in the UK, where she qualified second and finished fourth.

Her success was meteoric and towards the end of 2016, she was named by sportswomen.ie as Irish Sportswoman of The Year, beating names such as Katie Taylor and Annalise Murphy in a public vote to decide the competition.

“I didn’t expect it. With the list of names on it I just thought I didn’t have a hope! I guess race driving is kind of a minority compared to other sports and you think that a lot of people wouldn’t consider you to be an athlete. So it was a bit of a shock but it made me realise that all the hard work is worthwhile and it gives you motivation.

Despite her success, Drought still requires significant sponsorship, along with full time employment in order to compete. Drought works for Shane Somers & Associates, an accountancy firm in Limerick City, and even though the cost and the schedule can be hectic, she still loves every minute of her efforts.

“That’s the tricky part really (cost). There are times you might get a call to race the following weekend and you’d need to take the Friday off work, try and get late flights over and back and then be back in time for work on Monday.

“It does start to wear you out. But I’m lucky that my boss is very understanding with the whole thing and let’s me work up the time myself. So I’m lucky that way but it still does get tricky at times and makes you wonder why you do it. It is tough work but when the wins come and or a good performance you realise why you’re doing it at all.

“It’s just such an expensive sport and I’m really lucky that I have really loyal sponsors with me, but it is really difficult to get the money together and if you want to progress further again, it costs even more. That’s tough, but you have to show sponsors that you are worth investing in.”

“Long term my goal is to compete in Le Mans or Daytona 500. But for this year anyway I have a few races over in the UK, because most of my races are over there so hopefully I can progress from there,” she added.