Tipp put Limerick to the sword in Munster clash 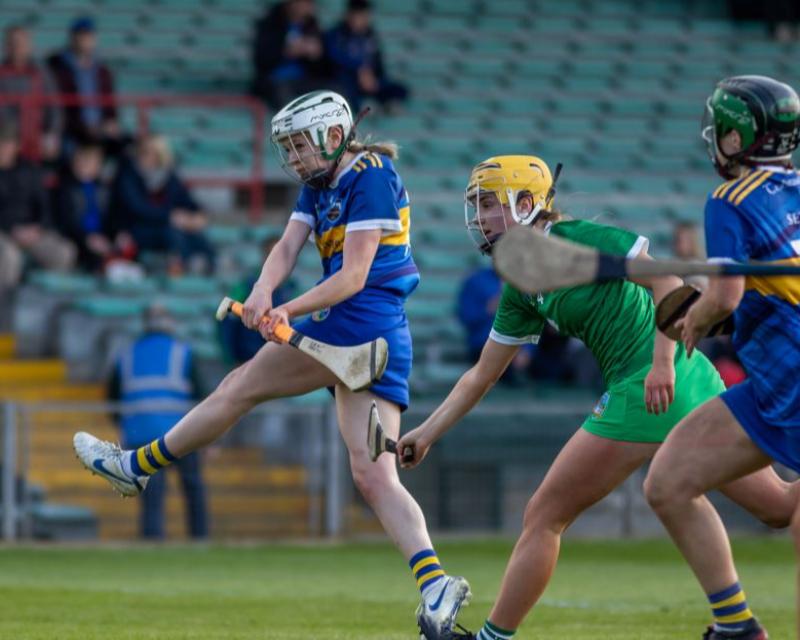 Tipperary played with the aid of a strong breeze and set the tone early on, scoring freely to lead at the interval 0-11 to 0-02.
Cait Devane had the first of her four frees within the first minute. A minute later Claire Hogan had Tipp’s second point before Limerick opened their scoring with a Orlaith Kelleher point.

The Tipperary response to Kelleher’s point was excellent with four unanswered points in as many minutes from four different players.

Niamh Treacy who started brightly in midfield raised the first of four white flags before the lively trio of Roisin Howard, Claire Hogan and Clodagh McIntyre all split the posts.

This gave the premier side a 0-6 to 0-1 lead by the 10th minute. The lead could have been greater but Claire Keating reacted brilliantly to a Claire Hogan goal chance to pull off a key save.

Limerick went 15 minutes without a score partly through good defensive play by Tipperary where sisters Caoimhe Maher and Ciardha Maher were on top in the half backline and als0 due to poor wides by the Limerick attack.

In the 18th minute Caoimhe Costello pointed a 45m after her initial shot on goal was saved by Aine Slattery. Unfortunately for Limerick this was to be their final score of the opening half while Tipperary hit five-in-a-row thanks to impressive shooting by their attack. Casey Hennessey and Rosin Howard both had points from play before Cait Devane nailed her second free of the day.

Jenny Grace ensured all six forwards had scored by the break with her point in the 24th minute while another Roisin Howard point finished the scoring and gave Tipperary a nine-point lead at half time 0-11 to 0-2.

A Caoimhe Costello free opened the scoring in the second half but Limerick failed to build on this and instead it was Tipperary who kicked on again with Casey Hennessey, Cait Devane and Claire Hogan adding to their personal tally to give Tipperary a commanding 0-14 to 0-3 lead on 40 minutes.

The lead could have been greater only for some excellent saves once again by Claire Keating. Caoimhe Lyons did find the range for Limerick and entering the final quarter it was 0-14 to 0-4.

Costelloe had further scores from placed balls but there was no way back for Limerick and in injury time a sweet pass from Claire Hogan to Eimear McGrath resulted in a well-taken goal for Bill Mullaney’s side.

Tipperary's 2,457 Alzheimer's patients ask you to host a Tea Day this May