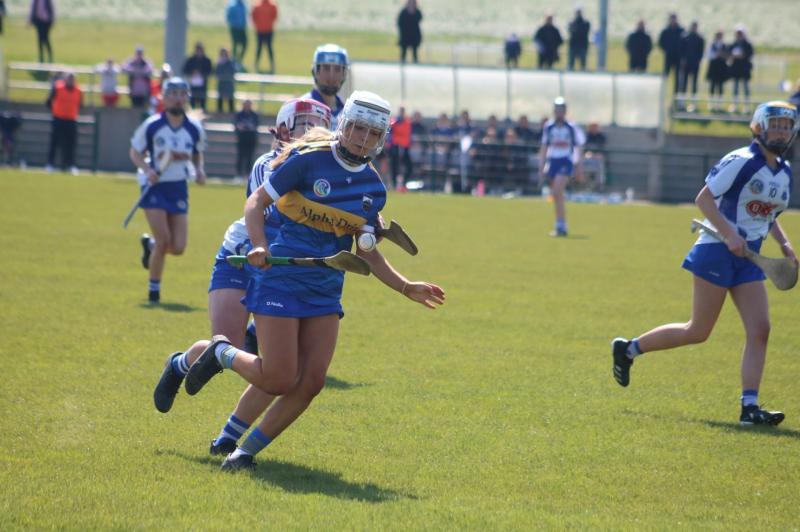 Tipperary crashed out of the Munster championship after a disappointing performance in the County Camogie Grounds on Sunday. Despite trailing by three points at half-time Clare produced an excellent second half performance aided by the wind to outscore the home side 0-10 to 0-3.

Tipperary started well and after 22 minutes they led 0-5 to 0-1 thanks to points from Aoife McLoughney and Clodagh Horgan. Clare began to settle and a point from play and a free reduced Tipperary’s lead back to two before Clodagh Horgan made it three again with her second point of the half. Both sides exchanged scores early in the second half but Clare began to get on top and by the halfway stage had equalised and then taken the lead courtesy of points from Niamh Mulqueen, Ellen Casey and the excellent Shauna Canny.

With the wind at their back the visitors grew in confidence and started to win more and more of the 50/50 battles.
Their workrate and determination was impressive and Tipperary struggled to break them down.
With 53 minutes on the clock only two points separated the sides with Clare ahead 0-11 to 0-9. Disappointingly Tipperary failed to score again and it was Clare who ran out 4 point winners.

For Tipperary the full backline of Meabh Elle Ryan, Rachel Maher and Niamh McCormack were solid throughout with Clare failing to score a goal or create any goal chance of significance. Mags Quigley was very good at centre back while up front Clodagh Horgan and Aoife McLoughney were the pick of the forwards.

Defeat ends their part in this year's Munster championship and attention now turns to the All-Ireland series which begins on the weekend of the 21st/22nd May at home to Cavan.

Played at Fedamore GAA grounds on April 23rd, Tipperary were favourites having comprehensively beaten Limerick in the All Ireland Group stages earlier this year.

However, these sides were evenly matched throughout both first and second halves. With a crosswind favouring neither side, Limerick emerged with a 0-6 to 0-5 points lead at half time.

There were some very significant moments in the first half, the first when the ball came off of the Limerick upright, Grace Moloney grabbed the rebound and buried it to the roof of the Limerick net from a tight angle. The umpire turned to avoid the shot and then mysteriously waved the ball wide as the sliotar had passed through the porous netting.

Later in the half Tipperary were carved open for two Limerick goal chances but two super blocks and hooks by the Tipp defence thwarted the goal chances. Anna Fahie scored a fine point from play with Lisa O’ Connor’s accuracy from frees keeping Tipp in touch.

Tipp started the second half well and led on several occasions but could never open up a safe lead. Lisa O’ Connor scored a further 3 frees and a Grace Moloney point was added from play. Limerick really came into it in the final 10 minutes seeing their chance for victory.

Tipperary followed up their opening round win over Clare with another very good performance to set up a Munster final in two weeks time against Cork.

Eimear Dwan got the John Ryan managed side off the mark with a point after four minutes before Waterford equalized. Tipperary added two more scores before Nicola Kelly found the back of the net.

The goal further spurred on Tipperary and they soon established a hard fought lead 1-06 to 0-1 lead. Waterford looked to play the ball through the lines throughout the opening half but as soon as Tipperary got to terms with this tactic they started to break it down time and again and started to really get on top leading at half time 1-09 to 0-2.

Waterford threatened after the restart and reduced Tipp’s lead with a well taken goal and a point. The Tipperary response was excellent and two points in succession from Lucy Purell swung the momentum back in their favour.

Midway through the second half the score read Tipperary 1-9 Waterford 1-3.

Waterford could only manage one more point in the remainder of the game while Tipperary struck for 1-2 the goal coming from Ciara O’Hora. The match was closer than the scoreline would suggest with Tipperary given a real test from the battling home side.

The players stood up to the challenge and can now look forward to a Munster final on Saturday the 7th May.