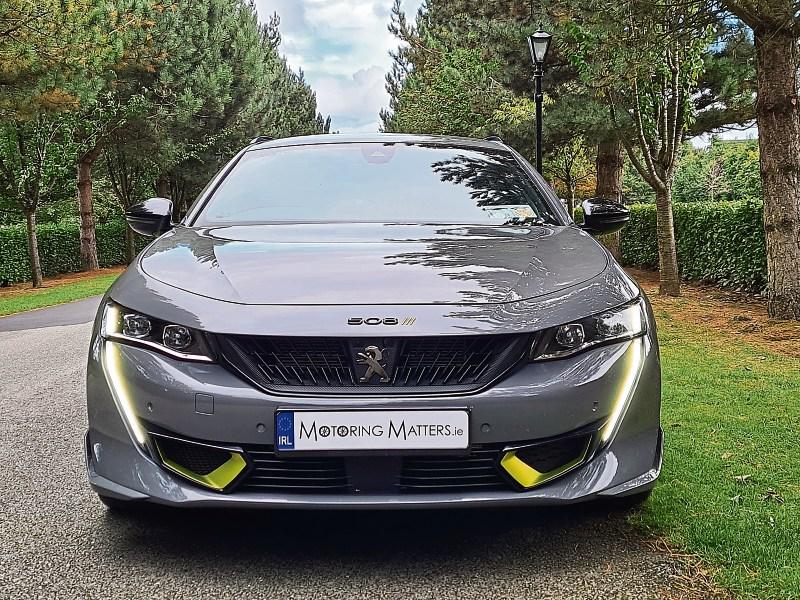 Up to now, the sports saloon and estate classes have traditionally been dominated by the German brands, but Peugeot has them in its sights with the mighty 508 Peugeot Sport Engineered (PSE), bringing with it plug-in hybrid (PHEV) technology and a choice of ‘Fastback’ (hatchback) or ‘SW’ (estate) body styles.

The 508 PSE sits on a new EMP2 platform which has been developed to incorporate an ICE engine along with two electric motors, whilst preserving space on board and boot volume.

Particular attention was given to weight reduction and balance to make sure the driving experience is as rewarding as possible. Benchmarked against Audi’s mild-hybrid diesel S4, Volvo’s V60 Polestar, Mercedes’ latest C-Class and the BMW M340i XDrive, the 508 PSE has the necessary ingredients required to face up to its talented rivals with its head held high.

Instead of using a turbocharged straight-six engine like its German rivals, the 508 PSE uses a 1.6-litre PureTech four-cylinder petrol engine in conjunction with a pair of electric motors. One electric motor is positioned on the front axle and the other on the rear axle, enabling the 508 PSE to benefit from the merits of all-wheel-drive for times when the going gets tough. Powering the electric motors is a 11.5kWh battery, which provides the car with an electric driving range of 41kms, but with 360bhp, this is the most powerful Peugeot production car ever. Adjustable suspension is standard, the front and rear track has been widened and the springs are now 50% stiffer for a pure sports car feel.

My test car was a Peugeot 508SW PSE Hybrid 4, which was finished in Selenium Grey (a no-cost option) for maximum visual drama. Fitted with Peugeot’s brilliant eight-speed (e-EAT8) automatic transmission as standard, and producing a thumping 520Nm of torque between 500 and 4760rpm, it is fair to say that the car’s performance is nothing short of spectacular.

Throttle response is instantaneous, and the power is delivered in an incredibly smooth and fuss-free manner. There is none of the jerkiness to the power delivery than can afflict some hybrids and this demonstrates where Peugeot’s time and engineering has been focused. Uneven and rutted road surfaces pose no problem to the 508 PSE (even with the car’s standard 20” wheels), while dips and crests in the road are dealt with in a composed and well controlled manner. The cars beefy tyres offer up plenty of grip and are accompanied by an unexpected level of finesse from the chassis when you start to take advantage of the cars terrific driving dynamics. Capable of reaching a top speed of 250km/h when in Sport mode, the 508PSE can sprint from 0-100km/h in just 5.2-seconds, and can consume as little as 2.0-litres of petrol for every 100km driven on a combined driving cycle.

The beautifully crafted cabin in the 508 PSE is (as in all modern Peugeots) a feast for the eyes and the senses, with all controls feeling great to the touch and easy to use. The car features a configurable 12.3-inch head-up digital instrument panel and a 10-inch central touchscreen with bespoke graphics, while an eight-speaker MP3 compatible radio, Bluetooth telephone facility and two USB sockets also feature.