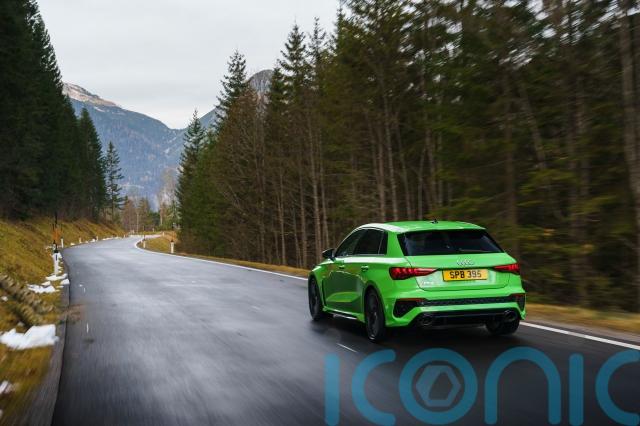 The third-generation RS3 hit the scene with what appeared to be relatively minimal changes. You could be fooled into thinking that this was more of a refresh, in truth, what with the unchanged power reserves and diminutive bump in torque. But, as we discovered on our first drive in Athens back in October, it was clear to see that Audi had changed the RS 3 in such a way as to dramatically improve the formula.

But we’re in the UK with the RS 3, so can it deliver a winning experience over the pock-marked roads we live with? We’ve been finding out. 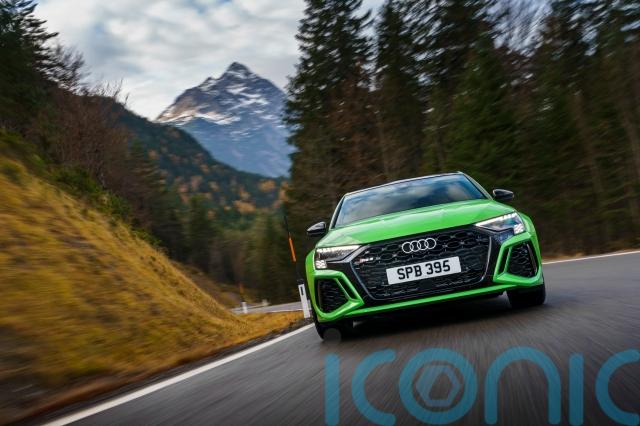 So as we already mentioned, on paper it might be easy to think that the RS 3 hasn’t undergone an awful lot of modification. But delve deeper and you’ll find a tweaked chassis as well as a new torque splitter at the rear which allows power to be shifted between the rear wheels, giving better mid-corner adjustability and added agility overall.

In the UK, all RS 3 models sit on adjustable dampers, while uprated brakes should help to bring it to a more effective halt – though you can specify carbon-ceramic versions should you want even more stopping performance.

What’s under the bonnet? 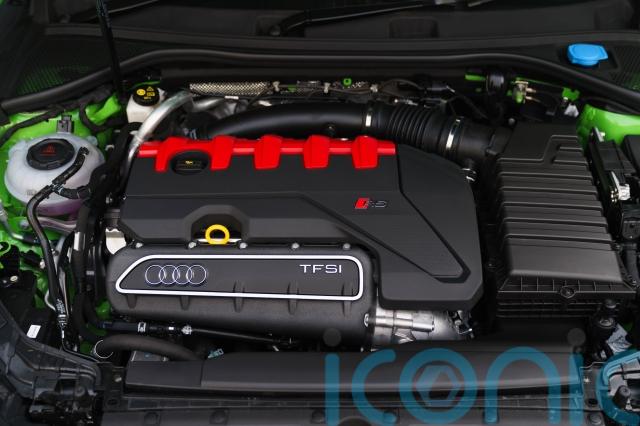 The 2.5-litre five-cylinder turbocharged petrol engine has become such a hallmark of the RS 3 that it has been retained for this latest model and, though its 394bhp output might mirror that of its predecessor, the new car now kicks out 500Nm of torque as opposed to 480Nm previously. That power is also delivered lower down in the rev range for more purposeful acceleration – it’ll do 0-60mph in just 3.6 seconds, in fact.

Where fuel economy is concerned, the RS 3 brings pretty much what you’d expect with a combined consumption of 31.4 and CO2 emissions of 205g/km. 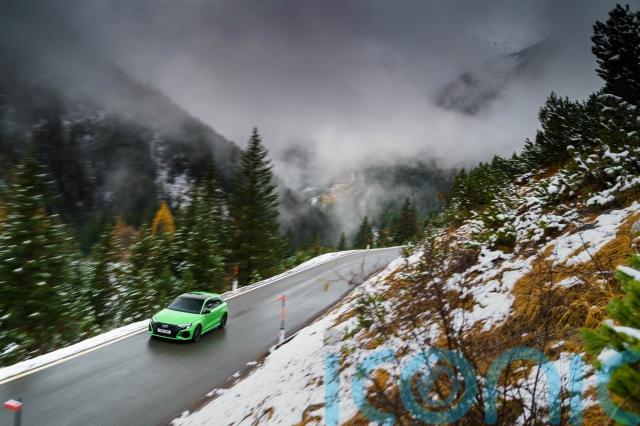 Something that strikes you about the RS 3 – initially at least – is how easy it is to drive ‘normally’. The ride is just pliable enough – though it does struggle with larger road imperfections – while the automatic gearbox shifts smoothly and easily when left to its own devices. There are an almost bewildering number of settings and modes to choose between, mind you, and it can feel like you’re a little overburdened with options when you just want to find the sweet spot of the car.

But get it dialled in and the RS 3 is seriously impressive. It’s ludicrously fast, too, but it deploys its power with very little fuss or drama. Cornering grip is sublime, too, and it doesn’t feel like you have to fight the car to get the best from it. The exhaust – even in its most raucous setting – is curiously muted, mind you, and that does dull some of the overall experience. We wouldn’t be surprised if tighter emissions regulations played a part in this.

How does it look? 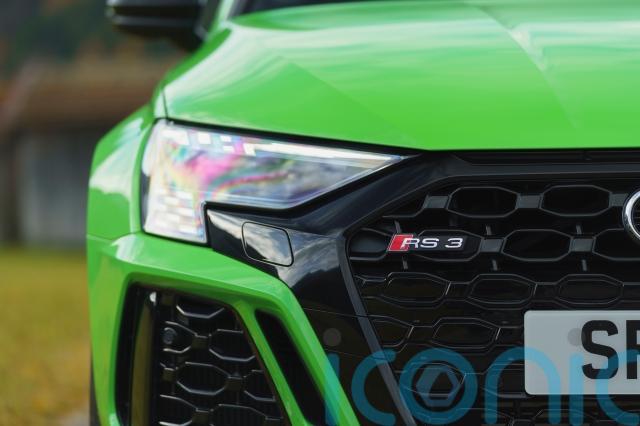 Though the RS 3 is available as a saloon once again, ‘our’ test car came in the ever-popular hatchback form. It feels like a tried-and-tested shape, in fairness, blending practicality and compact size to create a car that’ll be just as useful taking the kids to school as it will tearing down a country road. The new front-end styling gives the car some serious presence, too, while the air intakes behind the front arches add some additional theatre.

The previous-generation RS 3 was definitely more of an understated affair, so if you’re looking for a car with the same undercover characteristics, you might be a little disappointed. But we doubt that many people will fail to enjoy this RS 3’s newfound flamboyance. 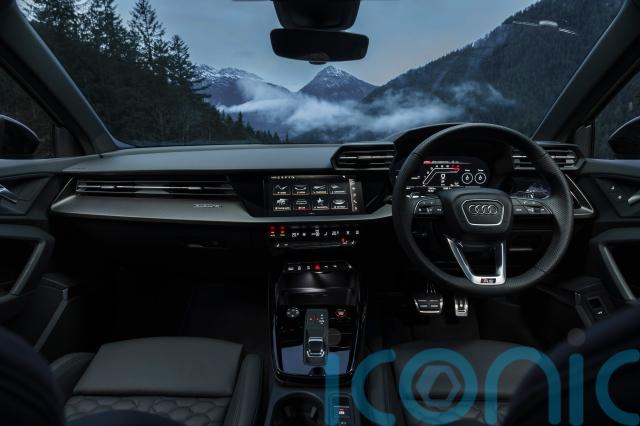 Audi is on a roll with its interiors of late and the RS 3 just feels like an extension of this. You’ve got quality materials aplenty used throughout the cabin, while the steering wheel’s shape is well-judged and feels good to use – though we wish the gear change paddles were a little more tactile. There are physical controls for the heating and ventilation (a refreshing touch in today’s screen-heavy offerings) and though the area around the gear shifter feels a little muddled, it’s a good layout overall.

There’s a reasonable amount of space in the back – though taller passengers might feel a touch cramped. In terms of boot space, you’ve got 282 litres to play with or 1,104 litres with the rear seats folded down. That’s nearly 100 litres down on the regular A3, mind you, owing to the inclusion of the all-wheel-drive system. 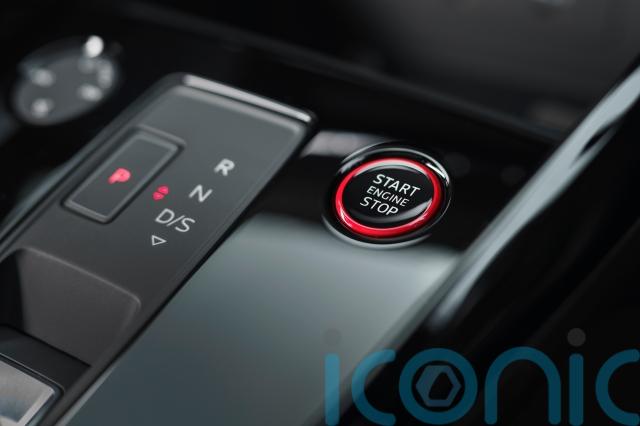 Our test car came in Launch Edition specification and was accompanied by a £60,460 price tag which, in anyone’s money, is quite a lot. It’s £6,000 more than the base car and sits above Carbon Edition but below top-rung Vorsprung. Around 100 cars will be delivered to the UK in this specification, so it’s pretty rare but does showcase what’s available in terms of specification – not quite sure what you mean here?.

You get a full Bang & Olufsen sound system, for instance, as well as darkened Matrix LED headlights. Matte black 19-inch alloy wheels are included too as is a high-gloss black front splitter and a full sports exhaust system. It also includes a lift for the speed limiter, boosting the car’s top speed from 155mph to 174mph. So if you’re planning on frequenting the German autobahn, this is probably the spec for you.

The little changes to this RS 3 add up to a big difference. The added agility is a real welcome trait as is the car’s ability to settle down and chew through the miles much like a regular A3. We’d prefer a more stripped-back number of settings, however, though pre-programming the RS shortcut buttons on the steering wheel is one way of circumnavigating this issue.

The only other issue we have with the RS 3 is the relatively dulled exhaust note which dampens the overall experience. However, as a way of getting from A to B very quickly and with minimal fuss, the RS 3 remains one of the best.