The View: Green shoots emerging from a disasterous campaign 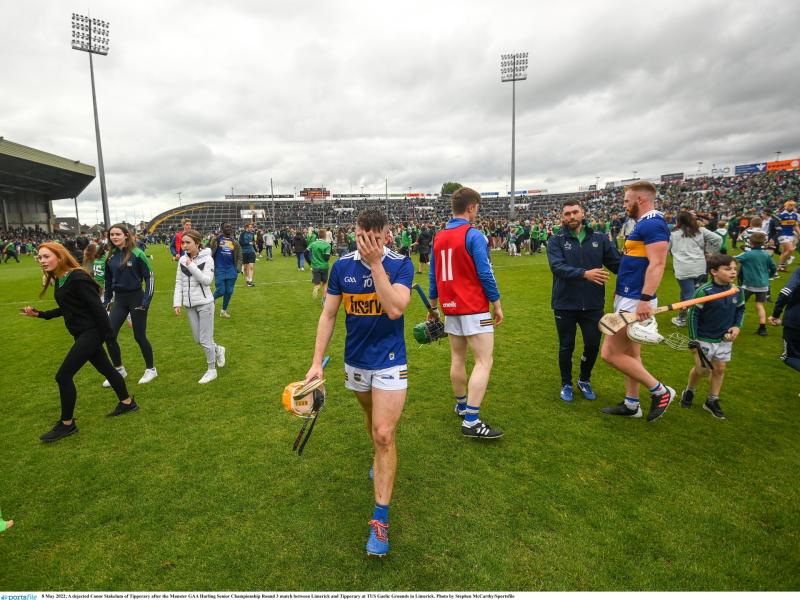 Conor Stakelum trudges off the pitch after the game on Sunday

It was much better than most Tipperary followers expected but the effort still came up some bit short.

Hopes of a shock Tipperary win over All-Ireland champions Limerick in the Munster senior hurling championship, round three, at Limerick on Sunday last, were destroyed by a power-packed last ten minutes from the holders who out outscored the Premier boys by 2-6 to 0-2 in that period to record a 3-21 to 0-23 victory that ensured the Shannonsiders of a place in the provincial final and ended Blue and Gold prospects of making the All-Ireland qualifying stages.

The final scoreline, a seven points Limerick win, is an injustice to the injury-riddled Tipp lads who hurled up a storm for sixty minutes. Despite conceding an 8th minute goal to Limerick’s Alan Gillane, Tipperary produced their best display under manager Colm Bonner to lead 0-14 to 1-9 at half-time and were still 0-20 to 1-15 clear when the Limerick onslaught came.

Five unanswered Limerick points between the 61st and 66th minutes put the champions clear by a goal and in the 67th minute, subs Flanagan and Boyle combined for Limerick’s second goal and a 2-20 to 0-20 lead that left Tipp floundering with time against them to redress the situation. 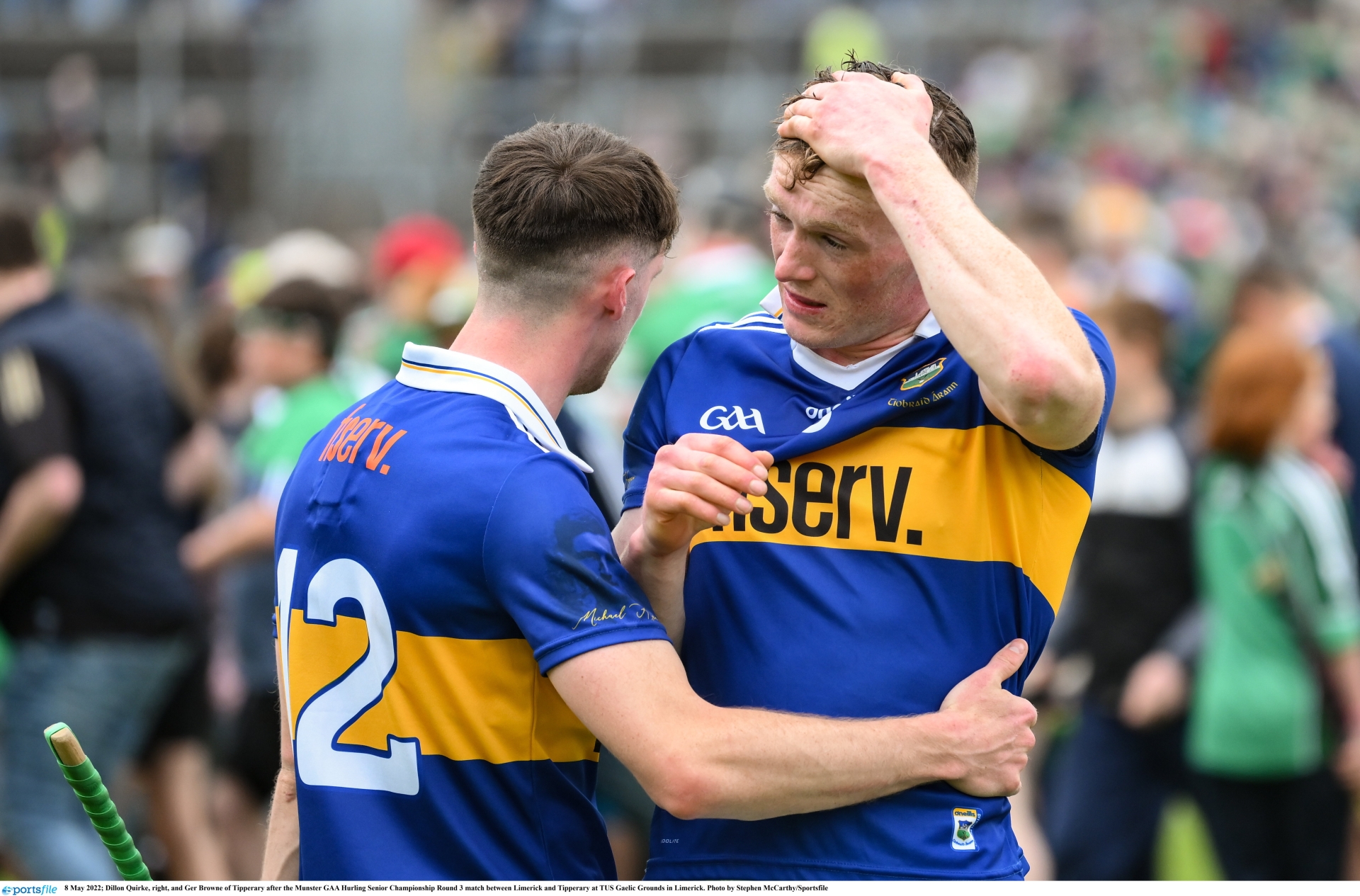 Final nail in the coffin
Three minutes later Alan Gillane outjumped Cathal Barrett before banging in Limerick’s third goal – the final nail in the Tipp coffin. The goals were the big difference between the sides. Tipp had three good chances but never rose a green flag – Limerick did not spurn their big opportunities.

Gallant in defeat Tipp were, but what consolation is that as they face into eight months of inter-county inactivity once they complete their provincial programme against Cork on Sunday week in Thurles, a game that will be of no consequence to the home county, and possibly not to Cork either depending on the outcome of their encounter with Waterford this week-end.

Bookmakers had Tipperary on offer at ten to one to beat the champions and Tipp followers travelled more in hope than confidence for a must-win game after losses to Waterford and particularly disappointingly to Clare in the opening rounds.

Without half of last year’s team due to retirements(Padraic Maher and Brendan Maher) and injuries(Seamus Callanan, John McGrath, John O Dwyer, Neil O Meara), a situation aggravated further by the late defections of Jason Forde and James Quigley, it was a tall order to expect a win in Limerick on Sunday where Tipp’s recent record against the home side would not inspire confidence. No team in the country could carry such a litany of losses.

Proud with effort
Even a full-strength Tipp side would start as outsiders, but Bonner’s beginners did themselves and their manager proud with a huge effort that rattled the champions but unfortunately faded in the closing minutes as Limerick’s experience and superb conditioning secured for them the victory that was widely predicted.

It is crucial now that the promise shown last Sunday and earlier in Waterford bears fruit in the final outing against Cork. A win there will not keep Tipp in the championship hunt but the performances against Waterford and Limerick, should form the basis for this evolving Tipp side to mount a serious title challenge next year.

Disastrous as this campaign has been – an undistinguished league run with wins over Laois and Kilkenny, followed by three championship losses - there are green shoots emerging to suggest that Tipperary can soon re-join hurling’s elite. Newcomers like Ger Browne (a great first half on Sunday), Conor Stakelum, Craig Morgan, Dillon Quirke, Mark Kehoe, Robert Byrne and Conor Bowe, will surely benefit from this year’s “blooding” and a bright future is in prospect, though right now the future is a long way off with no meaningful senior inter-county action until next February – almost eight months away.

Colm Bonner is entitled to feel “hard-done-by” in the manner in which fate dealt him a crumbling hand. Aside from the retirements and injuries, many argue that the re-shaping of the Tipperary side should not have been left until this year, that new blood should have been introduced earlier, but the plus for the Cashel man is that he now has “his team”, or certainly the makings of it, and he will face into next year with a much clearer picture of the pool of talent at his disposal. 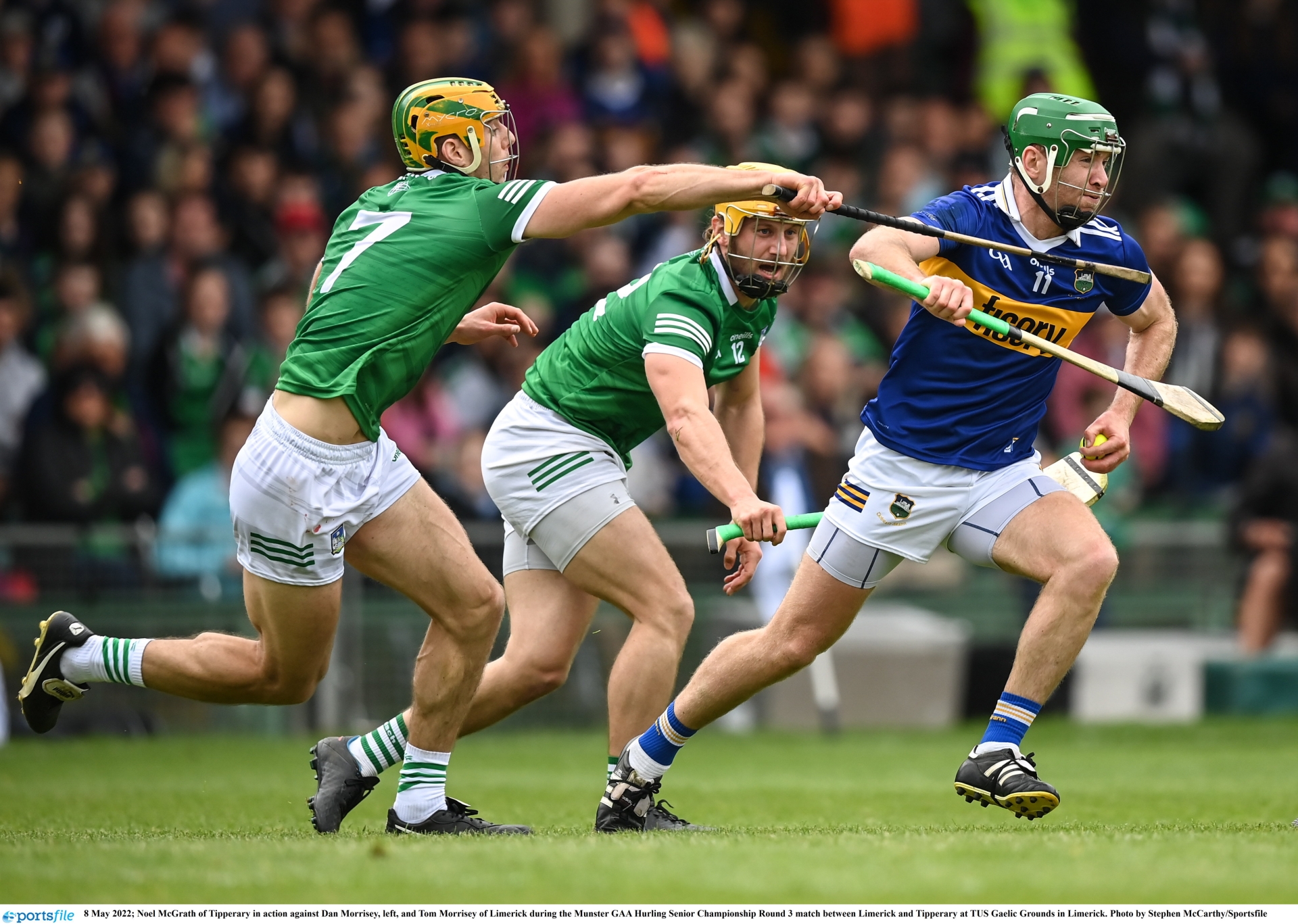 Above: Noel McGrath sets up another Tipperary attack

Frustrating as it is for Tipp followers accustomed to regularly being potential champions, he must be given time and support to make his mark.

For now however, the visit of Cork looms. Though the outcome may have no championship impact, Tipperary morale needs the boost of a win to sign off on a campaign most will want to forget as quickly as possible.