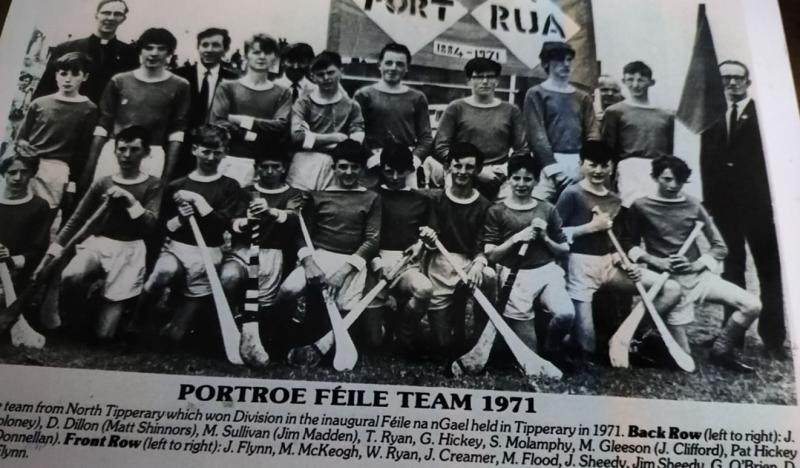 50 years have passed since John Sheedy and his Portroe team-mates won a national Féile na nGael title in the inaugural year of the competition.

Speaking to RTÉ reporter John Harrington, Sheedy recalls the memories fondly of the first edition of the iconic competition which continues to run to this day.

The passionate Portroe man and former Tipperary goalkeeper still regards that historic achievement for his club as a day of days.

“Absolutely, it was a huge deal for us at the time,” he told GAA.ie. “A crowd from Enniskillen in Fermanagh came down and stayed with us and we had a great weekend. It was absolutely unbelievable, I have to say.

“Along with every other team that took part we got to march through Thurles behind a banner so for young lads it was like Christmas Day had come!

“It meant an awful lot to us at the time and we were actually the only Tipperary team to win a Féile Final in that first year of the competition.

“We beat Knockavilla by a point in the Final and it was a titanic struggle. I think the score was 1-1 to 1-0. Gerry O'Brien scored the winning point and I'll always remember that it landed on the top of the net. It only just about made it over the bar!

“We had a huge game as well in the semi-final against Loughmore in Nenagh.

“We were eight points down at half-time but had a great second-half and won by two or three. The memories of the whole thing are just great.”

Sheedy’s younger brother is former Tipperary hurler and manager Liam Sheedy, and for them and their siblings Jim and Mike, hurling was always a way of life.

Their father Johnny sadly passed away when Liam was just a year old, so love for the sport was fostered by their mother Bid who was a renowned hurling fanatic.

“My mother used always say that once you could hurl, anything else about you was a bonus,” laughs Sheedy. “But you had to be able to hurl!

“When you'd play well she'd be delighted, so she was ten foot tall after we won that Féile Final. She was great, I have to say. She instilled that love of the GAA in us all.”

Turning Tipperary green with a donation of 1,000 trees