Martina Navratilova has accused Australian Open organisers of “capitulating” to China over the banning of T-shirts supporting Peng Shuai.

Spectators at Melbourne Park were instructed to remove T-shirts and banners bearing the slogan “Where is Peng Shuai?”, drawing attention to the predicament of the Chinese player.

Tennis Australia said it did not allow “clothing, banners or signs that are commercial or political” but that it continued to work with the WTA in seeking clarity on the situation.

There has been significant concern for the wellbeing of the former world doubles number one since early November, when Peng disappeared from public view after making allegations against a high-profile Chinese official on social media.

She has since been seen several times, including giving a TV interview, but her situation remains unclear. 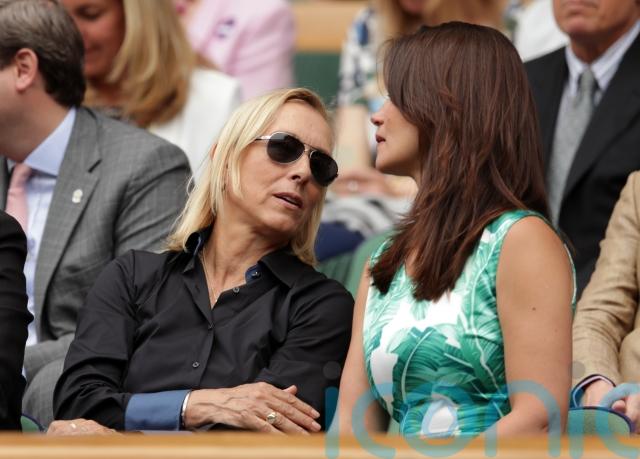 “We’ve had the issue with Peng Shuai, and now there were fans at the tournament watching Naomi Osaka practise, they weren’t even on the main court, they had ‘Where is Peng Shuai’ on their T-shirt and they were told to cover it up.

“I find it really, really cowardly. This is not a political statement, this is a human rights statement. Kind of really capitulating on this issue from the Aussies and letting the Chinese really dictate what they do at their own slam. I just find it really weak.”

The Australian Open styles itself as the grand slam of the Asia-Pacific region and works with several Chinese partners.

Following the incident, activists launched a fundraising appeal to print 1,000 T-shirts to distribute to fans attending the women’s singles final at Melbourne Park this weekend.

France’s Alize Cornet, who was the first player to publicly highlight her concerns regarding Peng, said of the T-shirt incident: “When I heard that, I was surprised. I think that everybody should be able to manifest their support to Peng Shuai.”

The WTA has taken a strong stance in support of Peng, suspending tournaments in China, which has grown to be its most significant market.

Cornet said: “It’s still very unsure how she’s doing but I think the fact to put some lights on this story was good for her overall. Now we are of course all waiting for more details that we don’t have so far, but we keep our fingers crossed.”