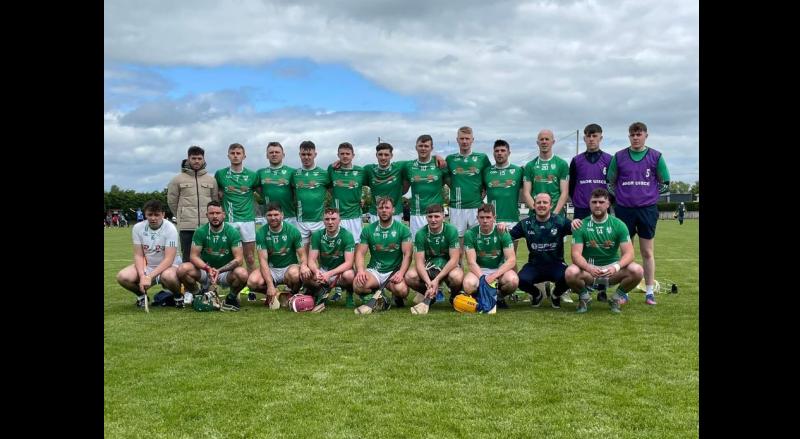 The previous week, when the sides met in the round robin stage, the North side had a five point advantage at the finish.
Played in good conditions before a small attendance, Borrisokane never really looked in danger as they had the ability to push on and hit back on the scoreboard, whenever Kickhams threatened.

They led throughout, except for the opening minute when Elliot Thompson put Kickhams briefly ahead. After this, man of the match, Oisin Larkin, produced a display of point taking, both from open play and placed balls. He would finish the game with 0.13 to his credit, with 0.5 coming from frees. He was particularly impressive during the opening ten minutes when he hit four points in a five minute period.

Before the start, Kickhams lost Stephen Browne to an injury sustained in the warm up and this created a huge gap in the centre of their defence, allowing Larkin to take advantage. Borrisokane led by four at the half time break and pushed on during the second period. Kickhams hit two goals during this time, the second coming in injury time, but these scores really only helped them play catch-up.

Borrisokane showed their ability to get scores more easily and Liam Dooley hit two, either side of an Oisin Larkin free. Kickhams were finding it hard to breach the tight marking Borris defence but a high ball into the goalmouth from Jack Ryan (B) was fielded by Pa Ryan, who crashed to the net on twenty five minutes, reducing the deficit to the minimum.

Again, Borris replied with three unanswered points as the clock ticked down. As half time approached, the game was held up for a period, due to a shoulder injury to a Borrisokane player. Their captain, Mike Heenan, was forced to leave the field and was replaced by Gary Ryan.

Kickhams also lost Eliott Thompson to injury and he was replaced by Dan Lonergan. When play resumed Kickhams attacked but Colm Larkin saved at the expense of a 65 which Orrin Jones converted. Oisin Larkin and Kevin Cleary added two more for Borris before Orrin Jones converted a free, eight minutes into injury time, leaving the half time score, Borrisokane 0.14, Kickhams 1.7.

Kickhams got the opening score of the second half when Orrin Jones converted a free inside the opening minute, but Borris hit back with points from Gary Ryan and Oisin Larkin to go five up. Kickhams rallied and Pa Ryan hit his second goal of the day cutting the deficit to two.

Not for the first time in this game Borris displayed their ability to pull clear and points from Oisin Larkin (2) and one from Gary Ryan restored parity by the three quarter hour mark, moving back to a five point advantage. Orrin Jones and Oisin Larkin cancelled each other out from placed balls, before Dan Lonergan and Jack Larkin exchanged points.

Inside the final seven minutes both sides exchanged points and when Jack Larkin hit his third of the day with two minutes remaining, Borris had gone into to a six point advantage. Kickhams continued to keep up the pressure and were rewarded with a Ben Loughman goal in injury time, in what was the last score of the game. Borrisokane, by virtue of this victory, finish runner up in Group 2 while Kickhams come back into the preliminary quarter finals as West champions.