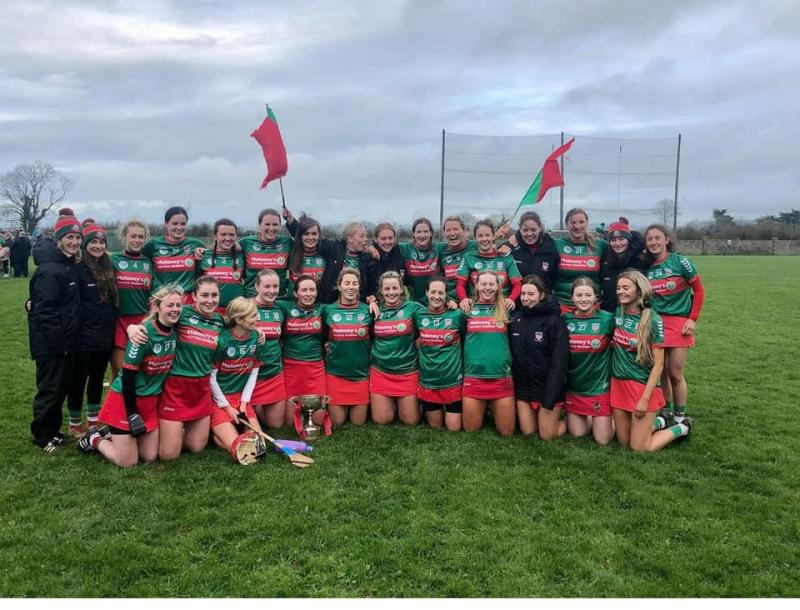 It proved to be certainly worth the wait for Drom-Inch Camogie Club as they were crowned 2020 Munster champions on Sunday in Killeedy after a mammoth battle with Clare champions Inagh Kilnamona.

Covid paid heed to Drom-Inch’s run last year when with only days away from contesting the Munster final the match had to be postponed.

In the months that followed it looked as if the whole competition was to be cancelled but eventually it was agreed to be played in November and December of this year and it was certainly worth the wait for the Tipperary champions.

Not only had Drom-Inch to wait 12 months but they were also made to wait the full 62 minutes as Inagh Kilnamona pushed them all the way and only when the final whistle sounded could they breathe a sigh of relief and begin to celebrate.

And celebrate they did, as they rightly feted a famous victory which was fashioned from hard work, great heart and spirit, and no shortage of skill to boot.

There was a strong wind in Killeedy blowing to Inagh’s advantage in the first half and they took an early lead after 4 minutes. This was quickly cancelled out by an Eimear McGrath point from play.

Both sides continued to exchange early scores with Eimear McGrath shooting over an exceptional point from a free into the wind from midfield to keep the Drom-Inch scoreboard ticking over.

Further points from Michelle Woodlock and veteran Joanne Ryan gave Drom-Inch a half time lead of 0-6 points to 0-4. And, they would have the breeze at their backs for the second half to assist them.

But, despite playing with the advantage of the wind in the second half Drom-Inch were finding the Inagh defence led by Claire O’Heir difficult to break down.

With Mary Burke excellent at midfield and Niamh Treacy and Aoife McGrath dominating on the wings Drom-Inch continued to lead 7 points to 5 but disaster struck just before the waterbreak when Inagh Kilnamona won a penalty and Aoibhinn Ryan made no mistake with the strike.

Eimear McGrath coolly slotted over a free in the 46th minute to tie the game and the travelling supporters were treated to a nail biting grandstand finish with both sets of players giving it everything to try and ground out a victory.

A superb catch by substitute Antoinette Kennedy who had just been introduced allowed her to lay off the ball to Siobhan McGrath who turned and fired over a point to the delight of the Drom-Inch contingent.

Inagh Kilnamona then responded with 2 points of their own to regain the lead and Drom-Inch looked to be in trouble until an Eimear McGrath free from distance was connected on by Siobhan McGrath as it was dropping short and her touch deceived the Inagh keeper and a badly needed green flag was raised - it was a major shot in the arm for Drom-Inch.

A minute later, a point from Inagh Kilnamona bought Drom-Inch’s lead back to a single point and in the dying minutes huge heorics by the Drom-Inch team was shown to prevent the 2020 Clare champions producing another score.

Corner forward Joanne Ryan rolled back the years as she mined possession and came out of defence with two balls while the full backline of Maria Connolly, Maurean Ryan and Eimear Cahill showed great skill and nerve to see out the famous victory.

Before captain Aoife McGrath was presented with the winning cup midfielder Mary Burke was deservedly awarded player of the match after a terrific display.

Congratulations to this wonderful Drom-Inch side which, of course, will also contest the 2021 provincial club championship in due course, having retained their crown recently with victory over Clonoulty Rossmore.

Next up from Drom-Inch though, is the 2020 All-Ireland semi-final against Galway winners Sarsfields on the weekend of the 11th/12th of December.

The office is open from 10am to 5pm Tuesday to Saturday

Tipperary motorists waiting up to six months for driving test