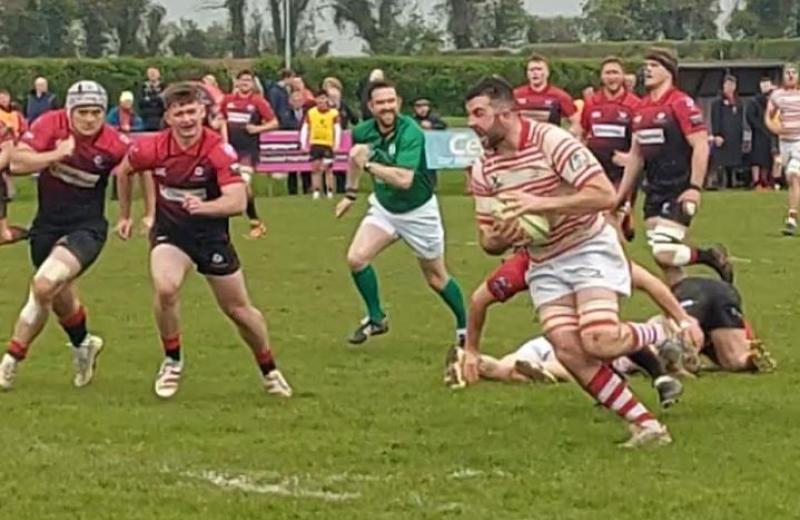 Evan Murphy running in a try in the second half.

Nenagh Ormond produced a clinical second half display in New Ormond Park yesterday as they consolidated their Division 2A status for next season with a win over Derry's Rainey Old Boys in the second leg of the Relegation Final.

An Evan Murphy try midway through the second half was the clinching score from a Nenagh perspective, as they grew into the game after the half time break, having started the game very slowly in lovely conditions in New Ormond Park.

After the previous leg played in Derry last week (17-17 draw), it was a clear cut decision as a win either big or small for either team would see them stay up in the division, and it was Rainey who looked the more purposeful in the first period, dominating the ball and converting the dominance on the scoreboard by taking the lead through a Scott McLean penalty after 17 minutes.

Nenagh were finding the going tough in terms of getting hands on ball for an meaningful build up of play, and Rainey were garnering great confidence from this as they continued the press the issue, and extended their lead in the 34th minute when Derek Corcoran was pinged for lying over the ball in a ruck right in front of the posts; McLean again slotting it over from the tee to make it 6-0 to the Derry men.

The home supporters were beginning to get very tense in the ground, but the worries were soon eased in the 37th minute, with Nenagh very first attack of note in the whole game producing a try, when a good lineout move just inside the Rainey half led to Peter Coman scything his way through the defence on the left wing to touch down, as Conor McMahon missed a tough conversion.

Somewhat against the run of play, Nenagh found the lead before the break as another Peter Coman line break led to an infringement from Rainey and it gave Conor McMahon the chance to slot over, which he duly did to give the home side a surprising and probably undeserved lead based on the balance of play at 8-6.

The North men weren't going to let the home side away easy though, and after the restart they were back in the lead after a try which closely mirrored Nenagh's in the first half, with Mickey O'Neill finding space down the left wing to sprint to the line and dot down, and with the conversion slotted by McLean, it was 13-11 to the visitors.

Nenagh to their credit did not panic, and as if to mirror their season to date, they left their best for the second half of it and re-took the lead through another McMahon penalty in the 54th minute, before the decisive and game clinching try came from Evan Murphy, who was on hand to receive a beautiful off the ground to gleefully fall over the line and give Nenagh clear day light at 21-10 with the final quarter to come.

Rainey were running out of steam though as Nenagh completely controlled the tempo of the game to cut off any angle of a Rainey come back, and when Nicky Irwin sniped a try from a stolen lineout late in the game, it was all she wrote as the Tipperary outfit ran out convincing winners to clinch Division 2A rugby for next season.

TRAFFIC: Drivers should plan ahead when travelling to these areas of Tipperary from Tuesday