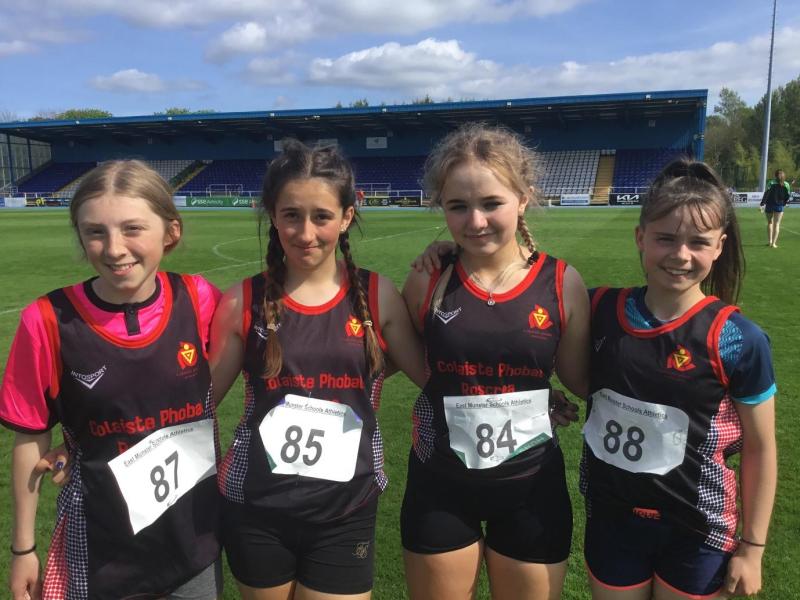 Coláiste Phobal Ros Cré had a very successful day in the Girls East Munster Track and Field Championships, which were held in Waterford RSC on May 4. Marie Shanahan got the team off to a great start with a silver medal in the minor girl's shot putt.

Marie's best throw of 8.15m guarantees her a place in the Munster Final in Templemore on May 21. Next up were the 100m heats and finals. Mia Steele ran a strong heat finishing fourth, and Tierna Conlon came 6th in her heat. Freya Frain was 4th in the junior final, and Ali Gleeson ran well in the Intermediate final.

Alannah Dunford added to the medal tally when she ran a tremendous race in the senior 100m final, finishing second in a time of 13.64. Later on, Alannah ran in the 200m final and crossed the finishing line in 3rd place. Kiera Fletcher finished strongly in the minor girls' 200m heat, while Alysha McNamee qualified from her heat but unfortunately was outside the medal places in the final.

Hurdles were next on the agenda, and Lily-Anne O'Meara set the pace in the minor 75m hurdles. Immediately after winning her heat, she lined up for the final and, in true style, brought home the gold medal in a fantastic time of 12.98. Lily-Anne and Kayla Dooley took part in the minor long jump.

Unfortunately, Kayla broke on her 1st two jumps, but she had a good jump of 3.75m in her 3rd attempt placing her 8th in the competition. Lily-Anne qualified for a further two jumps, and with her best jump of 4.36m came 2nd.

As always, the day drew to a close with the relays. The intermediate team, Ali Gleeson, Freya Frain, Kelly-Anne O'Meara and Amy Delahunty, gave a fine performance.

The minor team, Mia Steele, Lily-Anne O'Meara, Tierna Conlon and Kayla Dooley, ran a superheat and finished in first place. However, similar to the county championships the relays were judged on fastest times, and again our team came home with the bronze medals.

With only .62 seconds between second and third place, hopefully, the girls can improve for the Munster finals.