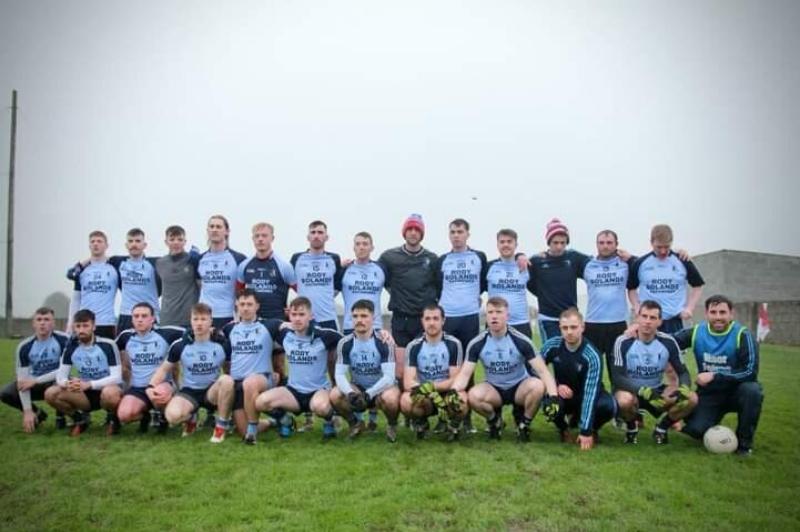 The Nenagh Éire Óg team which defeated Aherlow on Sunday.

Nenagh Eire Og, who were appearing in their first final, are the FBD Insurance county junior B football champions, following their five-point victory over west champions Aherlow in Sunday’s final  at Borrisoleigh.

The north champions were worthy winners on a day when the conditions suited them better, as they were bigger, stronger, fitter and more athletic than their opponents.

They defended well and attacked from the back and also had a greater spread of scorers. They had the ability to force Aherlow sideways and backwards, thus limiting their attacking options.

Aherlow were slow in their build-up and seemed to run out of ideas and options in their opponents’ half of the field.
Time and time again, they failed to deliver a quality final ball and were turned over more easily than their stronger opponents.
During the second half, Nenagh introduced Barry and Tommy Heffernan to their attack, and Tommy especially caused all sorts of problems for the Aherlow defence.

Throughout the game Aherlow were playing second fiddle, with the exception of a period before half-time, but they failed to convert their possession onto the scoreboard.

The game started at a very slow pace, with both defences on top. Adam Healy opened the scoring after four minutes with a point for the north champions.

Aherlow, in particular, were finding the heavy conditions hard to manage, but Tony O’Neill got in for an equaliser after eleven minutes. Both sides were guilty of missed chances and the status quo remained up to the water break.

Nenagh upped their game in the second quarter and hit three unanswered points in a five-minute spell, the points coming from Conor Ryan from a free and one each from Jake Morris and Sean Shanahan.

Aherlow hit back in the closing five minutes before the half-time break and points from Bernard O’Brien and a second from Tony O’Neill reduced the deficit to the minimum, 0-4 to 0-3.

Nenagh pushed on after the  break and points from a Conor Ryan free, and one from play from captain James Mackey had them three points to the good.

Nenagh had the ability to swarm back in numbers and smothered up the Aherlow attack time and time again. Bernard O’Brien kicked an Aherlow point but this was cancelled out by Adam Healy, as the Nenagh men held their three-point advantage at the water break.

Nenagh introduced Tommy and Barry Heffernan to their attack and they had an immediate impact, Tommy getting in for two well-taken points and Barry winning a lot of ball around the middle of the field.

Their superior fitness was evident in this final quarter, as Aherlow tried to work a chance for the goal that was needed in order to get back in the game.

Nenagh, however, held firm and further points from Mark Carey and Conor Ryan gave them a cushion coming down the home straight.

Aherlow’s Paddy O’Donoghue  pulled  a point back and Bernard O’Brien closed out the scoring deep in injury time with a converted free, but by that time Nenagh had done enough and ran out deserving winners.